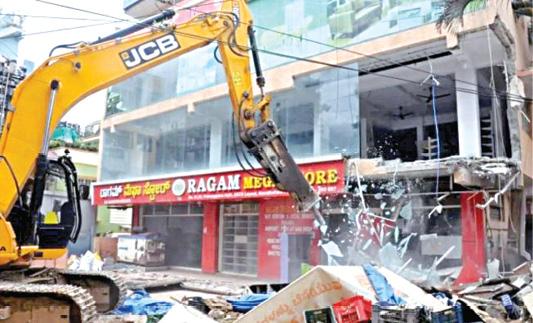 Bangalore: Karnataka Revenue Minister Ashoka has warned that buildings built encroaching on water bodies in Bengaluru will be razed to the ground like the Twin Towers in Noida.

Heavy rains in Bengaluru last week caused unprecedented flooding. As a result, thousands of houses and institutions in Mahadevapura, Bellandur, Marathahalli and Sarjapura were flooded with rainwater, causing a loss of more than Rs. 500 crores. Karnataka Chief Minister Basavaraj Pomi said that the main reason for the flood is the encroachment of water bodies and construction of buildings.

He also ordered the immediate removal of buildings encroaching on lakes, ponds and canals.

Subsequently, the Bengaluru Municipal Corporation officials have started the demolition of the buildings built encroaching on the water bodies in the Mahadevapura area. On a single day yesterday, more than 100 occupied buildings were demolished by bulldozers in areas including Marathahalli, Chinnapanahalli, Pasavanapura, AECS Lay-out.

Karnataka Revenue Minister Ashoka said, “In the first phase, 700 buildings have been identified as having been built encroaching on water bodies. Officials are engaged in demolition work. Illegally constructed buildings will be razed like the twin towers in Noida were demolished a few days ago. Legal action will be taken against the authorities and land owners who gave permission for these buildings,” he said.