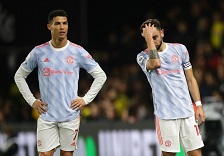 Watford dealt a new blow to Manchester United and its coach Ole Gunnar Solskjaer this season, and beat them 4-1 today, Saturday, in the twelfth stage of the English Football League.

Watford took advantage of Manchester United’s reeling state this season and taught him a harsh lesson in today’s match, which could have seen a bigger victory for Watford, but luck stubbornly stubbornly hit his players in the first half.

Watford ended the first half in their favour, with two clean goals, scored by Joshua King and Ismael Sarr in the 28th and 44th minutes, to translate the clear superiority of their team in the first half.

In the second half, Manchester United’s performance improved and substitute Donny van de Beek scored a goal for the team in the 50th minute.

But the team’s position became more difficult, with defender Harry Maguire sent off in the 69th minute for receiving a second warning in the match.