IndiaWe bought then; We give now
India

We bought then; We give now 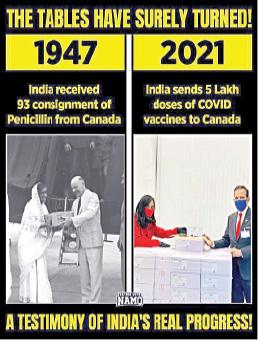 When India was liberated in 1947, millions were infected with malaria. Then from Canada Redcross society 93 boxes on behalf of India Penicillin drugs Were sent.

Shipped by plane from Canada Penicillin drugs They arrived in Delhi on October 17, 1947. The drugs were prescribed by the then Minister of Health Princess Amrit Kaur Received.

Now, even European pharmaceutical companies are struggling to produce enough vaccines during the corona virus era. Canada, which once exported drugs to countries including India, is now importing corona vaccines from abroad.

At his request, 5 lakh bottles of corona vaccines were sent from India to Canada. The vaccines arrived in the Canadian capital Ottawa on the 4th. Canadian Public Service Minister Anita Anand received the vaccines from Indian Ambassador to Canada Ajay.

India has exported corona vaccines to 47 countries not only in Canada but worldwide. We bought medicines from abroad during the independence of the country. India is now sending medicines even to developed countries. Comments and photos are being shared on social media.