“We have opened a safe corridor in Mariupol” .. a UN official tweets a picture 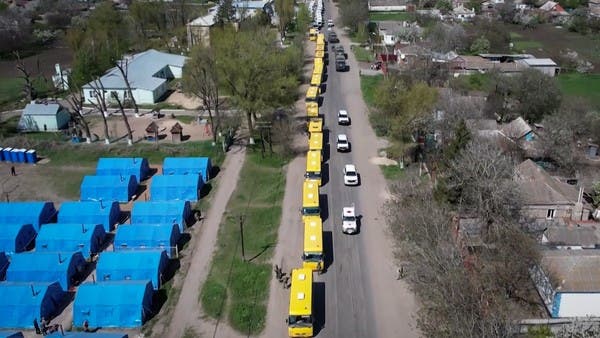 Despite the resumption of Russian bombing of the huge Azovstal complex in the city of Mariupol, southeastern Ukraine, the United Nations announced the evacuation of more than 100 civilians from the sprawling factory vicinity.

Today, Tuesday, the United Nations Coordinator in Ukraine, Osnat Lubrani, confirmed the success of the operation to open a safe corridor to evacuate civilians from the city.

I’m relieved to confirm that the safe passage operation from Mariupol has been successful.
The people I traveled with told me heartbreaking stories of the hell they went through.

I’m thinking about the people who remain trapped. We will do all we can to assist them. pic.twitter.com/mEqTTKZKA8

She also said in a tweet via her Twitter account, posting a picture showing evacuation buses: “I am thinking of the people who are still trapped… We will do everything in our power to help them.”

In addition, she revealed that she had heard heartbreaking stories about the hell they suffered in the city, which was besieged by Russian forces for weeks before they took control of it.

For his part, the head of the International Committee of the Red Cross confirmed that thousands of civilians are still trapped in many areas witnessing fighting between Russian and Ukrainian forces. He stressed that they are in dire need of assistance and safe evacuation.

Bombing and the beginning of the storming

The Ministry of Defense had announced earlier today that it had started storming the factory, explaining that “units from the Russian army and from the Donetsk People’s Republic began destroying with artillery and aircraft the firing positions of the Ukrainian fighters who left the factory” and apparently barricaded themselves in locations surrounding it. A spokesman for the press office of the Ministry of Defense, Vadim Astafeev, accused “the militants of the Azov battalion and the Ukrainian forces of closing the ceasefire.”

While Mariupol Mayor Vadim Boychenko confirmed, earlier today also that more than 200 civilians are still holed up with fighters in the famous factory. He said that about a hundred thousand civilians in total are still inside the coastal city on the Sea of ​​Azov, according to what Reuters reported.

It is noteworthy that the huge Azovstal factory was turned into the last of the “resistance” fortresses in the city, where thousands of fighters and civilians alike were barricaded, according to what the Ukrainian authorities announced.

However, the Russians announced last week, a ceasefire, with the aim of the exit of civilians and fighters alike, on the condition that they surrender.

From the Azovstal plant in Mariupol (Reuters)

But the two sides returned and exchanged accusations of violating that truce, and not allowing the evacuation of civilians, before the efforts of the United Nations and the Red Cross yesterday resulted in the evacuation of more civilians.