We heard these tales: how a monument to Samuil Marshak was opened in Moscow 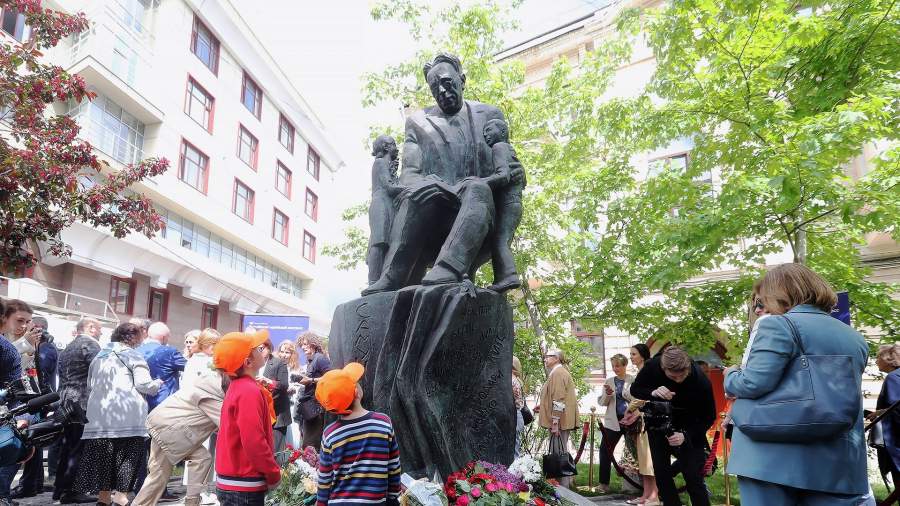 On International Children’s Day, a monument to the country’s main children’s poet Samuil Yakovlevich Marshak was unveiled on the smallest square in Moscow – Lyalina. The author of the monument admits that he invented it for ten minutes and used the chair of the writer himself. But it turned out to be much more difficult to coordinate the installation of the sculpture. In the end, everything worked out in 2022, and now the bronze Marshak stands exactly in the place where it was needed. Izvestia visited the ceremony and talked to the descendants, fans and even neighbors of the classic.

“The people sing in the street, / Make noise, conduct conversations. / So here it is – the hour, and the day, and the year / The accomplished victory!” These lines could describe the opening ceremony of the monument to the popular children’s poet and writer on June 1 in Moscow. It happened – after several years of troubles, trials, inconsistencies and agreements, a monument to Samuil Marshak was nevertheless erected on Lyalina Square of the capital.

The installation was initiated by the Russian Jewish Congress (RJC). The monument by People’s Artist of Russia Georgy Frangulyan was created with charitable donations. It will be donated to the city.

— Ten minutes and the image of Marshak was born! – the sculptor shared with Izvestia. – And what it will be embodied in, I also immediately imagined. This is my feature: I immediately see what will happen in the end. In general, it does not matter how much time was spent on the idea, the main thing is the result.

If it took ten minutes to build a monument, then it took several years for the bureaucracy, the resistance of the discontented public and the inhabitants of the surrounding houses.

— There was a conflict when a falsification of the layout of the monument appeared on the network, where the poet was depicted in a completely disproportionate size, and it seemed that he was huge. But in reality it wasn’t.– says Anna Bokshitskaya, executive director of RJC.

Now the monument is carefully inscribed in the landscape of the square. It stands surrounded by trees and is no higher than the second floor of the nearest houses. As the sculptor admitted, his name was slandered by ill-wishers. And instead of continuing to create in his workshop, Georgy Fragulyan was forced to make excuses, shoot videos in which he talked about the monument to Marshak and showed real models. Until all the dissatisfied were convinced, time passed. The installation permit has expired. I had to get a new one. And again, representatives of the RJC went around all possible offices. But all’s well that ends well.

On Children’s Day, the children’s writer gathered on the smallest square in Moscow big bosses, artists, politicians, athletes, who, at least for an hour, plunged into their most magical time. From the speakers came the voice of Samuil Yakovlevich Marshak himself. He read his poems: “Stupid little mouse / Answers her half-awake: / “No, your voice is not good. / You sing too loudly!” And they also sounded – “Scattered from Basseinaya Street”, “Mr. Twister”, “Where the sparrow dined.” The audience listened, smiled and repeated after the author.

— I live here, in Lyalka, so I could not help but come to the opening of the monument, ”Klara Novikova told Izvestia. – As Frangulyan told me, the chair in which Marshak sits, he made Samuil Yakovlevich from his working chaira. To my great regret, surprise, a generation is growing that does not know Marshak. And, apparently, now we need to tell them about the poet in a new way. If Chukovsky wrote only to children, then Marshak is not quite a children’s poet. He has wonderful translations of Burns, Shakespeare, poetry in Yiddish.

The installation of the monument in Moscow was supervised by Deputy Chairman of the State Duma Alexei Gordeev. Even when he was the governor of the Voronezh region in 2015, a monument appeared in the poet’s homeland – the first monument to Marshak in the country. And now there is a sculpture in the capital.

“Finally, it happened,” Alexey Gordeev is pleased. – We have come a very thorny path and it is symbolic that on June 1, International Children’s Day, this happened. We plan to open the Marshak Museum in Ostrogozhsk. This is the city where Samuil Yakovlevich spent his childhood and youth. Noting his merits, one cannot but say that he was a poet, a patriot and a humanist. He defended the interests of our state, helped people, and personally participated in everything.

The fabric was pulled off the monument by the writer’s grandson, the poet and translator Alexander Marshak, Alexei Gordeev, Leonid Slutsky, a member of the Bureau of the Presidium of the RJC Grigory Roitberg and the head of the Department of Culture Alexander Kibovsky. The sculptural composition is made of bronze. On the pedestal is an armchair in which Samuil Marshak sits with a book in his hands, around him are children.

The poet’s grandson liked the monument. He himself took an active part in his fate.

“We often met, worked hard,” says the poet, translator Alexander Marshak. – I saw with what love and awe Georgy Frangulyan treats the personality of Samuil Yakovlevich. I am grateful to everyone who contributed to the creation of the monument. I was amazed when an elderly man came and donated part of his pension to the installation.

The grandson bears a striking resemblance to his grandfather. He told Izvestia that The place for the monument was not chosen by chance.

— Samuil Marshak liked to walk here. A hundred meters from the square at Zemlyanoy Val 14/16 (former Chkalov Street) near the Kursk railway station, Marshak lived since 1938. Here he wrote translations of Shakespeare’s sonnets, during the war he wrote the fairy tale “12 Months”. Here he ran on the roofs and collected incendiary bombs. Samuil Yakovlevich wrote 1500 poems in support of the front. Marshak lived a long, very busy life. He passed away on July 4, 1964. On July 3, he edited his last fairy tale “Smart Things,” the writer’s grandson said.

The main guests at the ceremony, of course, were children. These guys know who Marshak is. They read the poems of the poet. Some of them could boast that their grandmothers even knew the poet.

“We came with the children because we were waiting for this holiday, we live in the same house where Marshak lived,” says the poet’s neighbor Elizabeth. — My mother remembers Samuil Yakovlevich with warmth, she remembers with what love he treated children. There is a plaque on our house.

Now justice has been done. And a square appeared in Moscow where you can come, put flowers and, sitting on the grass under a tree, like a poet once, read the books of Samuil Marshak.