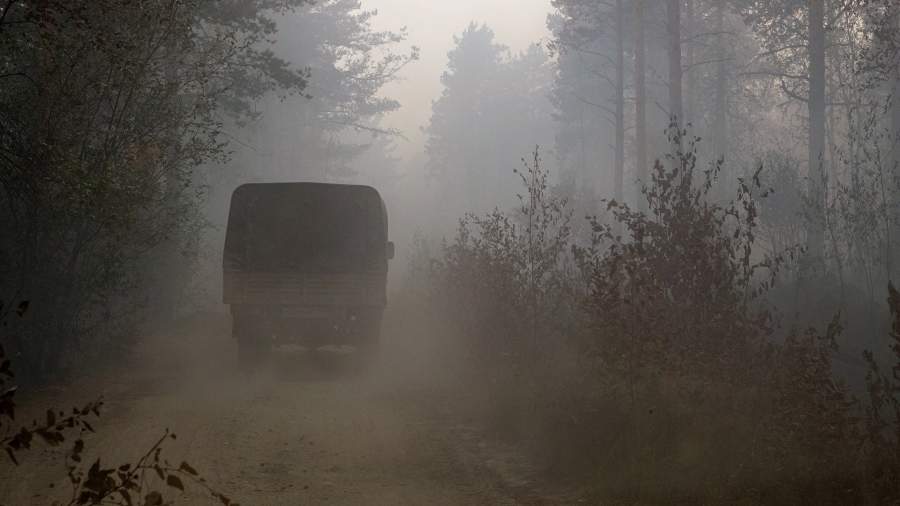 
The situation with forest fires in Karelia is still difficult – 32 hotbeds of fire are still operating here on an area of ​​7.4 thousand hectares. It burns in ten out of 16 districts that make up the region. On July 21, an emergency regime was introduced throughout the republic. Although the threat to human settlements is no longer there. The village of Naistenjärvi was in the greatest danger, from which residents had to be evacuated – fromPassers worked for a day and a half without food or sleep, told the Ministry of Emergencies. Although some inhabitants of the village believe that the firefighters nevertheless reacted late, since the fire was able to come so close to the dwelling. Izvestia was investigating what happened these days in Naystenjärvi.

“It was pretty creepy.”

The winding, winding road from Petrozavodsk to the village of Naystenjärvi takes about three hours. The driver who is taking us is from St. Petersburg. The area does not know, drives carefully, sneaks. Cars are flying dangerously towards the Karelian zigzags.

– Just like in Adler. The locals are not afraid, ”the driver notes.

Part of the way is a deaf off-road. At the entrance to Naistenjärvi we are met by a burnt-out forest. Sites with bottles, buckets, flasks of water appear along the road. There are dozens of such islands. People are standing next to them.

– We came here from Suojärvi (city 40 km from the village. – “Izvestia”) help put out fires, – said a woman with a tanned face, who introduced herself as Elena. – Friends asked us to help. On the internet, people screamed. As the car goes to Naystenjärvi, we call up, sit down, drive. Fill in all the containers and then simmer.

This is the first time in these places, volunteers add. The forest caught fire due to the thirty-degree heat.

– Of course, they also missed the moment, they just missed, – complains another member of the group, who did not want to give her name.

The damaged village itself, into which we finally get after shaking over bumps, unexpectedly turns out to be quite crowded.

The residents were supposed to be evacuated. Of the 600 people living in the village, 90 were placed in a temporary center in Suojärvi, all the rest went to their relatives living in the city or neighboring villages… But now, looking at all, many returned home.

– On Sunday at four o’clock we were evacuated, but in the evening of the same day we arrived back when we learned that the smoke began to dissipate. Our dog is very restless, we decided to return as soon as possible. Maybe there was no need to rush – the smoke was very strong, it was hard to breathe. Then he dissipated. But it was still pretty creepy, – shared an elderly woman who called herself Lyubov Vasilievna – we found her fishing in a small lake.

By the way, the smell of burning has not yet completely left the village.

– We noticed smoke back on July 11th. There was no wind then. I believe that even then it was necessary to extinguish everything, not to wait for it to flare up, – Lyubov Vasilyeva emotionally tells.

“Without a break for food and sleep”

Finally we got to the firefighters. We are met by the head of the press service of the main department of the Ministry of Emergency Situations of Russia in Karelia Maxim Rozhin and leads to demonstrate “Turning point in fighting fires” – in the literal and figurative sense. Now on the outskirts of the village, a deep moat – a mineralized strip… For some reason, he was already abundantly covered with household waste – bottles, old toys and various scrap.

One of the houses is located as close as possible to this strip and the burned-out area. We are met by a family: elderly parents and an adult son. According to the hostess, the smoke began to appear on Tuesday 13 July. On Saturday 17 July, the threat became serious and the woman and her husband were evacuated to Toivola.

“We saw fire everywhere,” says Evgeny, the son of the owners of the house. – They demanded action from the Emergencies Ministry, shouted, but they told us that everything was under control…

However, the rescuers themselves have a different version of what is happening.

– We arrived on July 15th. For the first day and a half, many had to work without a break for food and sleep.… The task was unusual. When you have to put out a burning apartment, the goal is clear. Here the situation looked differently: the fire had to be allowed to exhaust its strength and reach the mineralized strip, where we would have stopped it, – Alexander Rudenko, deputy head of the fire fighting organization and rescue operations of the Ministry of Emergency Situations in Karelia, shares with Izvestia. – If we started to extinguish it away from this strip, it could flare up again… This was a clear task for the representative of the aviation forestry. But some local residents thought that the Ministry of Emergency Situations was inactive. They even released information on social networks that the employees of the Ministry of Emergency Situations arrived, went to the store and are now drinking while residents try to stop the fire on their own. This is very insulting, from such hands fall.

From worries, he immediately goes on to gratitude, and very sincere – to the volunteers and all caring people who came to Naistenjärvi these days. One organization brought in a truckload of food and then made another shipment of baked goods. The youngest participants in extinguishing the fires – conscripts – were especially happy with her.

“The fire jumped out in an unexpected place”

At the local station, there is a red fire train with full cisterns of water, from which long sleeves stretch to the forest. Rescuers literally flooded Naistenjärvi. One of the employees of the Ministry of Emergency Situations is located at an abandoned house and has lunch. Young conscripts, who look like schoolchildren, carry water in special backpacks – the forces of the Nevsky Rescue Center of the EMERCOM of Russia were sent to help Karelia…

The headquarters of the firefighters is located at the school. There, the local administration organized a hot lunch and rest for them. Izvestia’s correspondents were kindly summoned to the dining room. EMERCOM employees with reddened tired faces monotonously move spoons, only occasionally asking what is known about the data from the drone. The latest information is quite optimistic, although it is too early to relax. Although the village has been recaptured, the battle with fire is not over yet. Segezhsky, Pryazhinsky, Muezersky, Suoyarvsky districts remain at risk.

It is impossible to reach hot spots of open combustion in these areas by ordinary car. Firefighters arrive there on foot.

– Some firefighters received thermal eye burns. They have already been examined and, fortunately, were allowed to go home to complete their treatment. And they say about them that they do nothing? The guys live in the forests in the literal sense of the word: they sleep for two hours, many do not even go to the headquarters, because there is no point, only a waste of time… Where they found to fall, they lay there, then they were replaced, they rested for a couple of hours and went on. We have one group that worked in the area of ​​the Suoeki village for three days without leaving. With such a serious threat, we lost only two outbuildings and one abandoned house, says Maxim Rozhin.

We look at the house that has survived among the ashes.

– The fire in an amazing way bypassed him and jumped out in an unexpected place, – explained Maxim Rozhin.

Blue, neat, with lace curtains – safe and sound, only slightly surrounded by ash. Waiting for its owners. Those still left their homes: everything could have turned out and not so well.

YosStop receives surprise for birthday in prison: I thank you for being there

2.25 crore for 49 days; The Big Boss star revealed the amount of the reward

OMG: In one night, ghosts built the temple of Lord Shiva, know the secret related to its construction

Gangubai Kathiawadi: There will be no Mila .. Alia Bhatt loves the director!