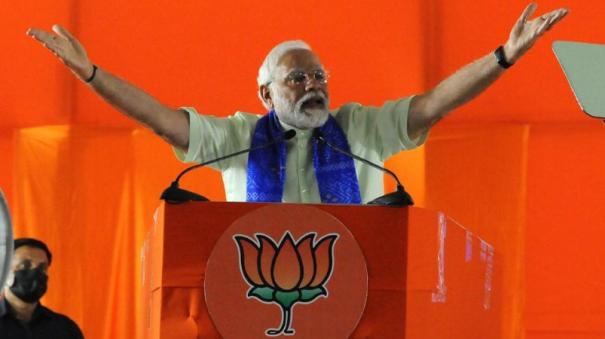 The executive committee meeting started at 9 am on the second day. Then political decisions were put forward. The 7-party resolution on taking power in Telangana in 2024 was passed unanimously. Apart from this, it was unanimously decided that the BJP should win and take power in the states of Karnataka, West Bengal, Kerala, Andhra Pradesh and Tamil Nadu.

Not only the Hindus but all the people of the community should be embraced and strived for their development. Special attention should be paid to the progress of the backward and weak people in Itarasamudhyam

BJP won the recent Lok Sabha by-elections in Rampur and Azamgarh in Uttar Pradesh. Most of the constituencies are populated by Muslims. In particular, Basmantha Muslims are the majority.

They are economically backward. We should be more concerned about their welfare and progress. Due to this, we made Dashish Azad, a member of the Basmantha Muslim community, to be included in Chief Minister Yogi Adityanath’s cabinet.

Similarly BJP needs more strength in Kerala. We must also fight for the welfare of the Christians living in that state. We should raise our voices and fight for the problems of the people of Kerala.

BJP is strong in East and North. Similarly, it is necessary to increase the strength of the party in the West and South. BJP is trying hard to make a tribal woman as the President. The people of the country should be informed about our presidential candidate Draupathi Murmu. People should be told about his hard work, simplicity and honesty.

Sardar Patel propounded the principle of One Bharat, Prosperous Bharat. We must strictly follow his policy. Let’s put an end to voter politics and give priority to development politics.

Assam Chief Minister Himanta Biswa Sharma told reporters about the executive committee meeting, “We discussed Telangana politics separately. Family politics and anarchy in the state were also discussed. Family politics in Telangana will be brought to an end soon,” he said.

Kannaiya Lal, who was murdered in Rajasthan, and singer Sidhu Mooswala, who was shot dead in Punjab, were condoled in the BJP executive meeting.