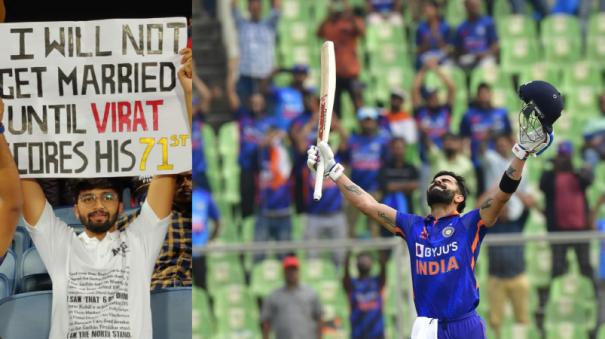 Pune: Indian cricketer Virat Kohli’s fan who said he won’t get married until he scores his 71st century got an unexpected gift on his wedding day. It has also gained attention on social media.

The popularity of cricket in India is unique. That and cricketers are worshiped as gods here. Virat Kohli is one such celebrated player. Aman Aggarwal is one of his biggest crore fans.

The period between the 70th and 71st century of Kohli is about 1020 days. In November 2019, he scored his 70th century in a Test cricket match against Bangladesh. He had registered his 71st century in the Asia Cup T20 series in September 2022.

In the intervening period, expectations were high as to when he would score his next century. Many people were giving different opinions about it.

Aman Agarwal is one of them. He had said, ‘I will not get married until Kohli scores 71 centuries’. Aman got married last Sunday while Kohli scored a century. On that day, Kohli scored his 74th ODI century against Sri Lanka.

“I asked for 71st cent. But on the special day of my life he scored his 74th century,” Aman tweeted.