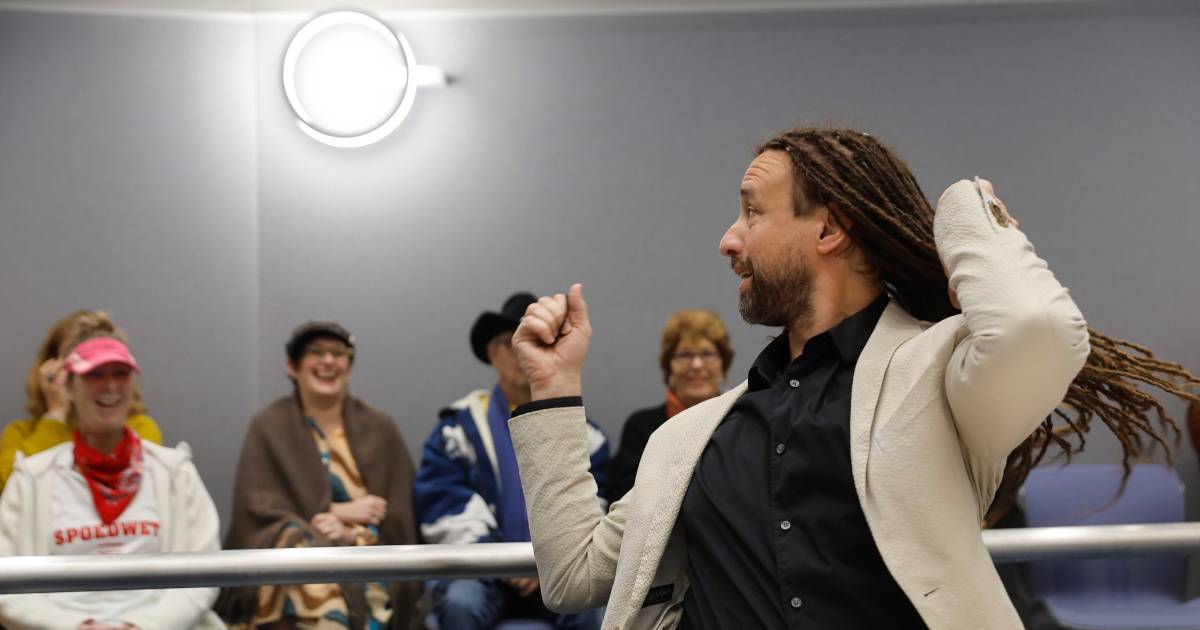 Is Virus Truth leader Willem Engel guilty of incitement if he gives a ‘do-assignment’ and a nursing home in Brabant is then flattened by scolding corona activists? In court it became a gossamer play of words.

At the end of September 2020, another corona wave will pass over the Netherlands. Nursing homes are again closing their doors to visitors. Virus Truth foreman Willem Engel is angry about it and writes on social media: ,,Just a do-assignment in between. Yet another nursing home has closed. Guldenakker in Goirle. We have concluded that this should never happen again and yet they are doing it again.” The Rotterdammer adds the telephone number of the nursing home. By ‘we’ he probably means his own organization Virus Truth and its supporters.


I wish you a slow, painful and lonely death and in combination with serious illnesses

The nursing home in Brabant is then called flat. Some of those callers curse or make death threats to the operators. One of those texts: “I wish you a slow, painful and lonely death and in combination with serious illnesses.”

The Public Prosecution Service finds Engel’s message sedition and punishable. This also applies to messages from him about a banned demonstration on the Malieveld in The Hague, about ‘drinking coffee’ at the official residence of Mayor Bruls in Nijmegen and about taking pictures of GGD employees at injection locations ‘for later’. The Public Prosecution Service picked up those messages from 2020 after a mass complaint against Engel from 22,000 Dutch people.

‘We are the decent people’

The case has been going on for a while. Today three witnesses, summoned by Willem Engel, were heard in the Rotterdam court: Jeroen Pols (legal advisor to Engel), Mordechai Krispijn (organizer of many demonstrations of Virus Truth) and Marieke Schreuder (who went to ‘drink coffee’ at Bruls).

Engel does not consider himself guilty of sedition. He states that people cannot give assignments because they decide for themselves whether they want to participate. And Virus Truth would always report nonviolent actions. Engel: ,,We do everything with love.” Witness and Virus Truth lawyer Pols: ,,We are the decent people, we always say. Don’t scold. Nothing comes close to sedition in this case.”

What is and what is not sedition is a fine line. When the mayor of The Hague banned a demonstration of Virus Truth on the Malieveld in The Hague in June 2020, Engel wrote on social media: “Remkes has banned our demonstration of love. We cannot, of course, forbid you to come, as you intended, but if you do come, come in love.”

“But that message does not say: don’t come!”, the court wanted to know. Pols: ,,We don’t give orders not to come, we can’t do that.” Hundreds of people came to the Malieveld on that 21st June. It turned into riots. The demonstrators threw stones and smoke bombs at the police, the police used a water cannon, among other things.

Judge Jacco Janssen: ,,Have you evaluated after that? That Virus Truth might have reacted differently?” Pols: ,,Of course we talked about it. We were not happy with violence. But we haven’t done anything wrong. Would do it again. The mayor should not have banned the demonstration.”

Text continues below the image

The Public Prosecution Service is also prosecuting Engel for a call to come to the official residence of the mayor of Nijmegen Hubert Bruls. That happened after the mayor closed café Moeke in the city because the company did not want to comply with the corona rules. Later, a fire is also set at that house.

Marieke Schreuder from Nijmegen, called as a witness by Engel, did indeed ‘drink coffee’ (activist language for demonstrating, ed.) in front of Bruls that day. She also placed a letter (‘with hearts) and bananas (‘as a symbol of the banana republic’) there. “It was my own idea. I hadn’t seen Willem’s message at all. I live in Nijmegen and was angry about what Bruls had done.”

Judge Janssen did point out to Engel an apparent contradiction in his own reasoning. The activist himself was very angry with lawyer Jan Vlug when he ranted about him in the TV program Jinek. Not much later a man stood in front of Engel’s house and threatened him. Judge Janssen: “Do you see that as incitement?” Engel: ,,It was a statement from him that could have consequences.”

There are hardly any corona demonstrations anymore. The corona measures have been lifted. Willem Engel is still active as an activist, now, among other things, with the farmers’ protests.

The trial will resume in November. Then the Public Prosecution Service comes with the sentence against Engel.

Norbert Dikkeboom filed a complaint against Willem Engel on behalf of 15,000 Dutch people last year: ‘We accuse him of incitement, spreading medical disinformation, statements with terrorist intent and fraud’: