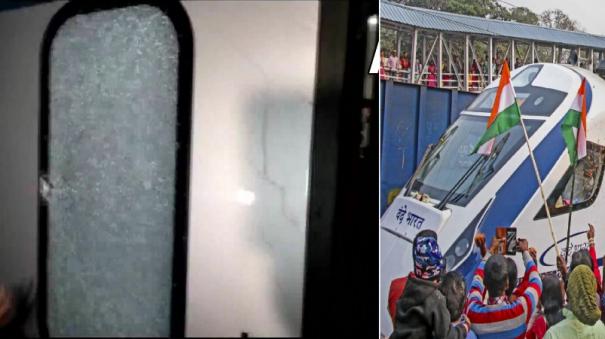 Kolkata: A new one launched four days ago Indian Railways has reported that the vande bharat express was pelted with stones and its windows were shattered.

The stone pelting incident took place near Malda railway station in West Bengal. The railway administration said that no passenger was injured in the attack and there was no delay in the train’s journey. A case under Section 154 of the Indian Railways Act has been registered against an unidentified person in connection with the attack and investigation is underway.

This train covers a distance of 550 km between Howrah and Jalpaiguri and reaches its destination in about seven and a half hours. Operating 6 days a week except Wednesday, the Vande Bharat train departs Howrah at 5.50 am and reaches New Jalpaiguri at 1.25 pm. In the reverse direction, it leaves New Jalpaiguri at 3.05 pm and arrives back at Howrah at 10.35 pm. It is to be noted that the Shatabdi Express train is already running between these two cities.