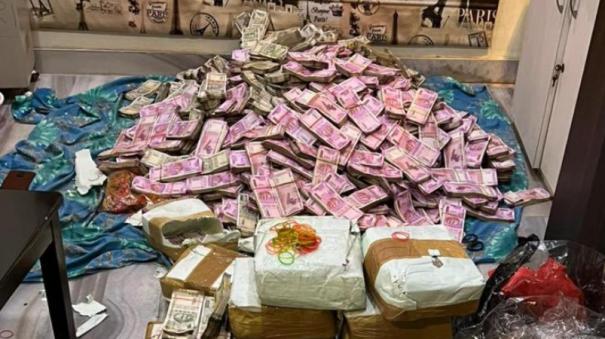 Kolkata: 15 crore in cash has been recovered from the residence of actress Arpita Mukherjee, who is close to West Bengal Education Minister Partha Chatterjee, during a raid by the enforcement department.

Similarly, gold jewelery and gold bars have also been recovered. A search was conducted yesterday at a residence in Kolkata’s Belgaria area. The bank officials counted the seized money on the spot using a note counting machine. Also, the enforcement department is said to have seized some notes from the cupboard.

Earlier, another residence belonging to Arpita Mukherjee was raided last week. Rs.21 crore cash was seized from that house. Apart from that, foreign currencies worth Rs.54 lakh and jewelery worth Rs.79 lakh were also seized. It was reported that the authorities recovered a diary containing 40 pages of notes and several property documents.

Background of the case:

In the last year 2016, a notification was issued for the appointment of 13,000 teachers and staff in the West Bengal Education Department. There were complaints that a few thousand people were appointed illegally in this appointment. A large number of people filed a case in the Calcutta High Court in this regard. After hearing this, the High Court ordered a CBI investigation.

The then Education Minister Partha Chatterjee was interrogated by the CBI for several hours on April 25 and May 18. The investigation revealed that there was a massive money transfer fraud. In this regard, the Central Intelligence Agency, the Enforcement Directorate, has started an investigation.

A few days ago, officials of the enforcement department conducted raids at 13 places in Kolkata, including the house of Minister Partha Chatterjee, the houses and offices of his close relatives. At that time, the houses of actress Arpita Mukherjee, close to the minister, were also raided. Now the minister has been arrested and is being interrogated.