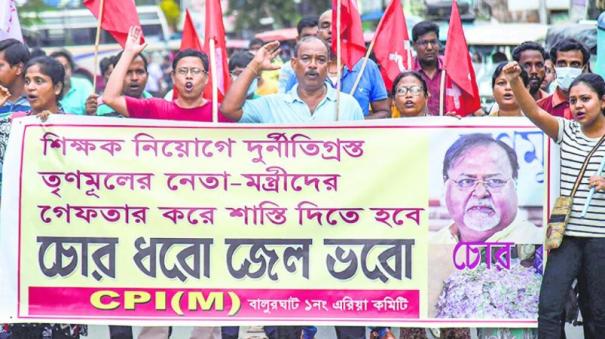 Kolkata: There were allegations of irregularities in the appointment of government teachers in West Bengal from 2014-2016.

Those who scored less in the qualifying examination were placed in the merit list. Many submitted blank answer sheets with name, address and received appointment orders as assistant teachers. A large number of complaints piled up in the Calcutta High Court in this regard.

In this case, the term of appointment of 13,000 Group D employees ended with the year 2019. But even after that more than 500 employees were appointed and complaints were filed in the Calcutta High Court that they were getting government salaries.

Subsequently, the Calcutta High Court banned the payment of salaries to 573 illegally appointed employees and ordered a CBI investigation. The Enforcement Directorate has also started an investigation into the money transfers that took place. The High Court oversees the trial.

The CBI has alleged that an additional appointment committee was formed illegally in the West Bengal School Service Commission and the committee selected those who had failed the teacher qualification test. Actress Arpita Mukherjee, who is close to her, has accumulated crores of money received as bribe by Partha Chatterjee, who was then education minister. He has bought her luxury cars, kilos of gold jewelry and houses in many parts of Kolkata.

Arpita Mukherjee (30) is famous for acting in Bengali and Odia films from 2008-2014. She has been involved in modeling since her college days and became an actress. After his association with Partha Chatterjee (69), he became director of several companies. Actress Arpita, who was leading a luxurious life, when she was caught by the enforcement department, said, “I don’t know anything. Bartha Chatterjee hoarded all this money” he shouted.

Various charitable organizations and victims are protesting against the teacher appointment scam. In this context, Abhishek Banerjee, general secretary of Trinamool Congress and son-in-law of Chief Minister Mamata, met the protest group the day before yesterday. He assured that their problems and demands will be considered and action will be taken. Opposition parties have questioned why the Trinamool leaders, who have not met the protest group till date, are suddenly interested in them.