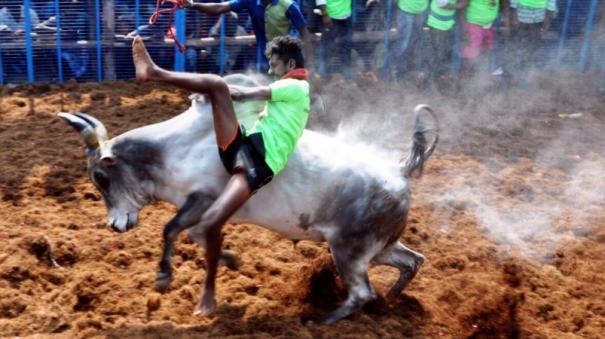 New Delhi: The Supreme Court has adjourned the case for the hearing without specifying a date after the arguments of all parties have been completed in the case filed by organizations including PETA seeking a ban on jallikattu competitions.

The case filed by PETA and animal welfare activists demanding a ban on jallikattu came up for hearing on the 7th day on Thursday in a five-judge constitutional bench headed by Justice KM Joseph.

Senior advocate Shyam Diwan, who appeared for the Beta organization at that time, said, “Jallikattu can endanger human life. Similarly, bulls also have serious physical consequences. Bulls do not want to run in jallikattu, they are forced. Therefore, the data collected by their side in this matter for the last 5 years has been field researched. , the court has to consider the evidence, the statements. And Jallukkatu is a cruel game,” he argued.

The thirty judges said, “No one uses weapons in this sport. No bulls are killed. How can you call this a cruel sport? In Spain bullfights are attacked with weapons, but here they are not? Here men try to tame the bull with their bare hands. So how is this a cruel sport?” Clarify that.”

According to the Beta organization, “Any game that results in loss of life is classified as a cruel game.”

At that time, the judges said, “A sport cannot be called a cruel sport just because there is a loss of life. Those who try to bury the bull in Jallikattu go bare-handed. Moreover, the bull is not killed. Meanwhile, loss of life and blood injury is only an unexpected incident. Trekking is also very dangerous. . So can it be banned?” They questioned.

To which the Beta organization said, “Trekking is a dangerous sport or activity. No cruelty is done in it. Because the trekkers do it according to their will. But do the bulls participating in Jallikattu do it willingly? Of course not. They don’t know how to express their right.”

After this, the judges recorded the arguments of all the parties and instructed all the parties such as the petitioners, respondents and intervenors of this case to file their written arguments within two weeks and adjourned the verdict on the jallikattu case without specifying a date.