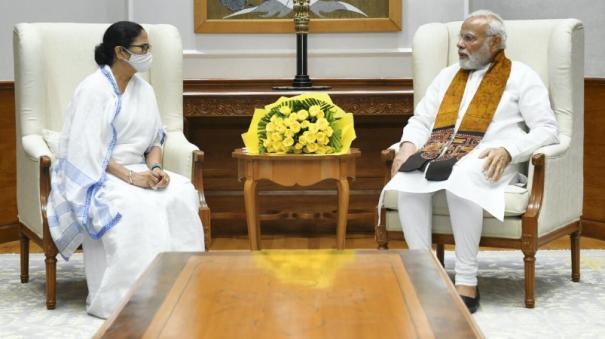 New Delhi: West Bengal BJP members have demanded that the Prime Minister should explain the background of Chief Minister Mamata Banerjee’s meeting with Prime Minister Modi, who is strongly opposed to the Central Government.

Chief Minister of West Bengal and Trinamool Congress leader Mamata Banerjee is a strong critic of the BJP, which heads the central government. Also, Mamata avoids meeting Prime Minister Modi during his visit to West Bengal. In this case, Mamata arrived in Delhi 2 days before today to participate in the Niti Aayog meeting.

During this meeting, the funds for the central government schemes being implemented in the state of West Bengal should be allocated on time. Mamata is said to have urged Prime Minister Modi to pay the dues of GST to the state immediately.

But Partha Chatterjee, who was the education minister in Chief Minister Mamata’s government, has been embroiled in teacher corruption allegations. The enforcement department seized Rs 50 crore cash from the house of actress Arpita Mukherjee, who is close to him. Also, they arrested both Chatterjee and Arpita. Both are currently in jail. In this case, one more state minister is currently under investigation by the Enforcement Department in a corruption complaint.

In this situation, what is the need for Mamata to meet the Prime Minister? What was the background of the meeting? Now West Bengal BJP people are questioning that Prime Minister Modi should explain about this.

In a post published by former BJP state president Tathagata Roy on his Twitter page, “There have been many discussions in West Bengal regarding this meeting. In this meeting, it is said that a secret agreement has been reached on the West Bengal corruption issue. If this is true then Trinamool Congress murderers and thieves will roam free. Therefore, Prime Minister Modi should ensure that there is no secrecy in this meeting,” he said.

Mamata should not be trusted

Dilip Ghosh, another senior leader of the BJP, says that an agreement has been reached between the central and state governments by meeting Prime Minister Modi. “The central government should not get caught in Mamata’s trap in any way,” he said.