What is the necklace that the Jordanian king gave to Prince Mohammed bin Salman? 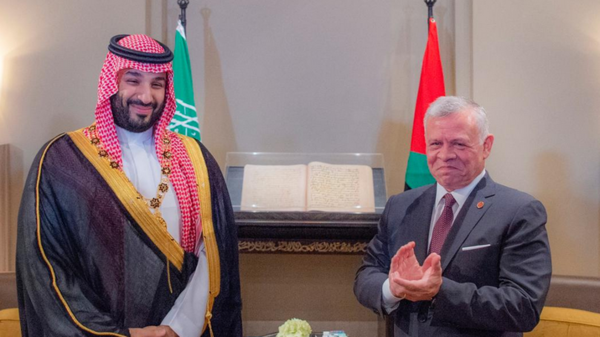 The necklace is the highest civilian decoration in the Hashemite Kingdom of Jordan, and is awarded to kings, princes and heads of state.

The necklace of Hussein bin Ali is one of the highest honors in Jordan. It is granted to kings, princes and heads of states who have a strong and distinguished relationship with His Majesty the King. It is also awarded to those who perform great services from heads of government.

In 2017, King Abdullah II awarded the Custodian of the Two Holy Mosques, King Salman bin Abdulaziz, the “Sharif Al Hussein bin Ali” necklace, which is the highest decoration in the Kingdom of Jordan granted to kings and heads of state.

The Order of “Al-Hussein Bin Ali” or “Al-Hussein Bin Ali” necklace in relation to the Sharif of Mecca, King Hussein Bin Ali, is the highest rank of equestrian titles in the Hashemite Kingdom of Jordan, established by King Abdullah I Bin Al-Hussein on June 22, 1949, with the aim of granting it to deserving workers in Rewarding charitable fields and foreign heads of state.

What is it made of?

The necklace presented by the King of Jordan to the Saudi Crown Prince is made of a double chain of gold and enamel with five-pointed stars and small red flowers decorated with gold with a camel in Arabic.

The badge is oval in shape, made of gold and diamonds, with a red disc in its center inscribed with a sentence in Arabic, and the badge is attached to the scarf by the golden royal crown.