What is the story of the musical instrument engraved on the rocks of Najran? 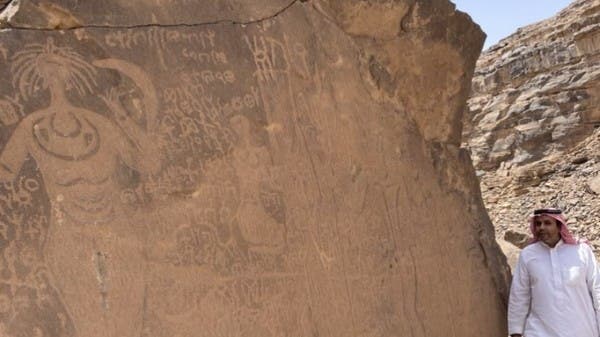 The Saudi researcher in rock drawings and inscriptions, Ahmed Al-Nagheither, told Al Arabiya.net about an archaeological plaque engraved on a rock in the Najran region (southern Saudi Arabia) showing a girl playing the harp instrument.

Al-Nagheither said, “This instrument is one of the oldest musical instruments, and it was found in the ancient Egyptian civilization, as well as in the Mesopotamian civilization in Iraq. It consists of knotted wood and strings, and was used in the past in religious worship and dance ceremonies. It spread widely in the Arabian Peninsula.”

Concerning the location of this painting, he said: “The painting is in Najran at the Hima site, which is registered on the UNESCO World Heritage List, and it is the sixth Saudi site recorded in this list. The cultural rock art area is located in Hima on an area of ​​557 square kilometers, and includes 550 rock art paintings containing hundreds of Thousands of rock carvings and drawings, which are located near the famous wells in Hama, about 17 km away from them.

The girl carved on the rocks of Najran

He explained that this painting is located in a large valley, and the Frenchman Chekhov Minoza had previously visited and photographed the rock painting in the seventies of the last century.

He added: “This painting expresses a dance party, due to the presence of a musician, a dancer, and a warrior. It contains Thamudic writings and some animal drawings.”

Returning to the origin of this musical instrument, the earliest instruments resembling a fugitive were found by the Sumerians in 3500 BC, as they appeared in Egyptian tomb wall paintings dating back to about 3000 BC. This instrument flourished in Persia and developed into many forms until the 17th century.

The instrument consists of three main parts: the voice box, the neck, and the strings. It differs from other stringed instruments in that its strings descend perpendicular to its sound box.