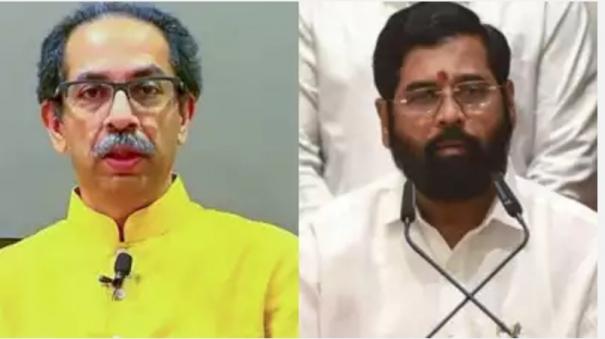 Mumbai: Maharashtra Chief Minister Eknath Shinde attacked Uddhav Thackeray in the Legislative Assembly saying that he has come to know who Shiv Sena MLAs are with today. A barrage of questions

Eknath Shinde is sitting as the Chief Minister of Maharashtra on behalf of the BJP alliance. Senior BJP leader Devendra Fadnavis has been sworn in as Deputy Chief Minister.

The new government will prove its majority in the assembly on July 4. Following this, the election for the post of Legislative Council President was held today. On the coalition government side, BJP MLA Rahul Narvekar contested for the post of Maharashtra Assembly Speaker and won.

Later, Eknath Shinde spoke in the assembly. Then he indirectly attacked Uddhav Thackeray and senior Shiv Sena leader Sanjay Rawat. Then he said:

Till date we have seen people shift from opposition to government side. But this time the people who participated in the government went to the opposition. The exit of many MLAs including the ministers who brought down the Uddhav Thackeray-led Maha Vikas Agadi government is a big deal for a common worker like me..

It was a big deal for an ordinary worker like me who was devoted to the ideology of Balasabheb Thackeray and Anand Thicke. They claimed to be in touch with several disaffected MLAs.

Some kept saying, we are in touch with some MLAs, sometimes it was 5, then 10, 20, and 25. Whatever their opinion or expectation was, it was wrong.

I did not force any MLA. They came to me. We will fulfill the dream of Balasakib Thackeray. Everyone thought that Fadnavis would be the Chief Minister. I don’t want chief minister post. It came naturally to me.

BJP has 115 MLAs. We have 50 people on our side. But the BJP generously offered me the post of Chief Minister. I would like to thank PM Modi, Amit Shah and JP Natta. I don’t have any expectation of getting Chief Ministership.

This is what he said.