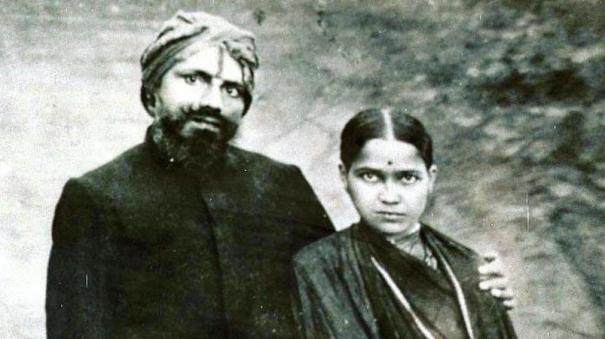 New Delhi: Bharatiyar’s childhood home is located in the Hanumar Padithura area of ​​Varanasi, Uttar Pradesh. Bharatiyar lived here for four and a half years, called ‘Shivamadam’. Presently Bharatiyar’s sister-in-law PV Krishnan (97) and his family live in this house. In 2014, BJP’s former Rajya Sabha member Tarun Vijay negotiated with the family to convert Bharatiyar’s residence into a memorial. Krishna refused to hand over the entire house to the government.

In this case, the Tamil Nadu government held talks with Bharatiyar’s family. It was then agreed to make only a small room a memorial. It was also decided to build a library with a bust of Bharatiyar. For this purpose, the Tamil Nadu government issued an ordinance on July 5. With the approval of the Bharati family, the works are being carried out at a cost of Rs.18 lakhs. A news about this was published in the ‘Hindu Tamil Vektik’ newspaper on the 20th while the Kashi Tamil Sangam program was going on.

Following this, Union Education Minister Dharmendra Pradhan went to Bharatiyar House in person. He also expressed his desire to have a part of their home turned into a memorial. Subsequently, Varanasi District Collector, Tamil S. Rajalingam held talks with the Bharatiyar family. A grand plan is being developed to rebuild the entire house and leave only the lower part as a memorial.

Collector Rajalingam, who belongs to Tirunelveli Kadayanallur, told ‘Hindu Tamil Vektik’ newspaper, ‘There is a plan to modernize it digitally and construct a new separate entrance gate. Bharatiyar’s literature, poetic works, role in the freedom struggle, and the social revolution he did will be prominent in the memory. Hologram also has a plan to set the scene as it happens in Bharti’s house. The work will start after the negotiation for this,” he said.

The central government has decided to celebrate Bharathiyar’s birthday on December 11 as ‘National Languages ​​Day’ and issued a notification. Prime Minister Modi is likely to visit Bharatiyar’s residence on December 11 and make an important announcement.

An application has been made on behalf of the Tamil Nadu government to the Varanasi district administration seeking permission to convert Bharatiyar’s house into a memorial. Without obtaining this permission, the Tamil Nadu government cannot convert the room of the Bharatiyar House into a memorial. Thus, the opening of the memorial by the Chief Minister of Tamil Nadu through video as planned has become a question mark.