Why did Congress leave the party? – 5 page letter of Ghulam Nabi Azad in detail… 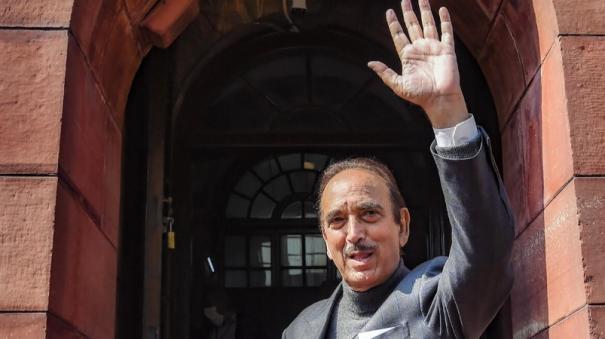 Sheikh Mohammad Abdullah was arrested on August 8, 1953 in Jammu and Kashmir. Congress had no respect in Kashmir then. In this situation, I joined the Congress in 1970.

During the freedom struggle, I was inspired by the principles of Mahatma Gandhi, Nehru, Sardar Patel, Maulana Abul Kalam Azad and Subhash Chandra Bose. On the insistence of the late Sanjay Gandhi, I took charge of the Jammu and Kashmir Youth Congress in 1975-76.

Since 1977, under the guidance of the then Youth Congress President Sanjay Gandhi, I participated in various protests and was imprisoned. We held a rally in Delhi to protest the arrest of Indira Gandhi. Then I was also arrested. From December 20, 1978 to the end of January 1979, I was in Delhi’s Tihar Jail for a very long time. I worked hard for the development of the Indian National Congress started by late Prime Minister Indira Gandhi. The Congress government was formed in the mid-1980s by the efforts of thousands of volunteers.

From 1982 to 2014, I had the honor of serving as a Union Minister in the governments of Indira Gandhi, Rajiv Gandhi, Narasimha Rao and Manmohan Singh. In 1980, I was in charge of the General Secretary of the Congress. I was a member of the Congress ruling council till the death of Rajiv Gandhi.

I served as a member of the Congress Working Committee for 40 years. As the general secretary of the party, I have been working in charge of various states for the last 35 years. I have given victory to the Congress in 90 per cent of the states where I have worked as an in-charge.

I served as Leader of Opposition in the Rajya Sabha for 7 years. I have served Congress since my youth. I forgot my health and family and worked for the party.

There is no doubt that you (Sonia) have been effective as Congress leader. The United Progressive Alliance government ruled at the center from 2004 to 2014. It’s because of you. You acted on the advice of senior leaders.

In January 2013, you appointed Rahul Gandhi as the Congress Vice President. His foray into politics was a very unfortunate incident. After he assumed office, he completely undermined the system of deliberative decision-making. He completely sidelined the senior leaders of the party. He is running the party with people who have no experience and praise.

I would like to point out a prime example of Rahul Gandhi’s immaturity. He tore up a copy of the Ordinance enacted during the previous Congress regime in front of reporters. Rahul tore up the law, which was considered by a high-level Congress committee, approved by the Union Cabinet headed by the Prime Minister, and approved by the President. His childish action undermined the authority of the Prime Minister and the dignity of the central government. It is because of this that the United Progressive Alliance was defeated in the 2014 Lok Sabha elections.

From 1998 to 2013, after Sitaram Kesari was removed from the post of Congress President and you assumed the post of President, there were 3 serious consultative meetings of Congress leaders. Decisions taken in these meetings are not properly implemented. In particular, I drafted a comprehensive action plan to revitalize the party before the 2014 Lok Sabha elections with the advice of the Congress Working Committee members and recommended it in a consultative meeting held in Jaipur in 2013. This recommendation, accepted by the Congress Working Committee, should have been systematically and gradually implemented before the 2014 Lok Sabha elections. But this recommendation is pending for last 9 years. I have met you and Rahul Gandhi many times in person and urged them to implement these. But no attempt has been made to consider these.

The Congress suffered a crushing defeat in both the Lok Sabha elections in 2014 under your leadership and in 2019 under the leadership of Rahul Gandhi. The party has lost 39 of the 49 assembly elections held between 2014 and 2022. Congress has won only 4 elections. Participated in coalition government 6 times. Now Congress is ruling in only 2 states. It is a minor ally of the ruling parties in two more states.

The situation in Congress is worst since 2019. Rahul Gandhi resigned from his post as chairman in an emergency after insulting senior leaders who had dedicated their lives to the party in the expanded working committee. It was in this meeting that you were elected as the Acting Chairman and continued in the post for the last 3 years. The remote control model that eroded the organizational stability of the United Progressive Alliance is now being implemented in the Congress Party. You are the face of important decisions taken by Rahul Gandhi, his bodyguards, his aides, and his aides.

Last August 2020, I and 22 senior leaders wrote a letter and tried to draw attention to the fact that the party was going underground. Then the gang controlling the party brutally attacked and insulted us, and according to the gang’s instructions, my model funeral was held in Jammu. The funeral rites were felicitated by party general secretaries and Rahul Gandhi in Delhi. The house of former minister Kapil Sibal, who defended you in the cases against you and your relatives, was attacked.

The mistake made by the 23 leaders who wrote to you was to point out the cause and solution to the party’s weakness. We were heavily criticized in response to taking those ideas into consideration in a constructive, integrated way. We were insulted and slandered. Congress has gone to the point of no return. This is due to the elevation of those who act as masks to the leadership of the party.

In this context, a newly elected person can be like a puppet. BJP dominates at the national level and regional parties at the state level. The leadership of the party has been handed over for the past 8 years to an individual (Rahul Gandhi) who has shown no interest in anything. This is the reason for the downfall of Congress.

Internal party elections have become a farce. No elections were held at any party level and in any part of the country. Some of the lists prepared by gangs controlling the party from Delhi are pressurizing the All India Congress Committee members to get their signatures.

Fraud is going on over who controls the Congress, the movement that once led the country’s freedom struggle. All India Congress Committee leadership is responsible for this. On the occasion of the 75th Independence Day celebrations, the party leadership should ask the Congress if this situation is necessary.

I have a personal relationship with your family from Indira Gandhi era, Sanjay Gandhi and Rajiv Gandhi era. In that army is one who is personally concerned with your sufferings. It will always continue. I and others who have worked with me in the party will continue to strive outside the Congress for the goals for which we have dedicated our lives. Before embarking on the Unite India Yatra, the party leadership, it is better to undertake the Unite India Yatra. Ending 50 years association with Congress. I resign from all responsibilities including basic membership. Ghulam Nabi Azad has said this.

Who are the G23 leaders?