Why is Dinesh Karthik the first choice wicket keeper of the Indian team? – 3 reasons 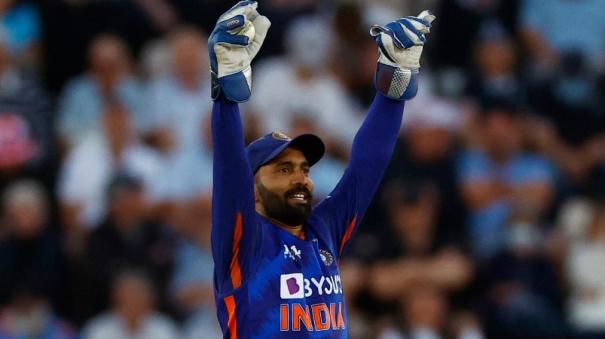 Dinesh Karthik (DK) is the first choice wicket keeper of the Indian cricket team as can be seen from the recently held Asia Cup group round match against Pakistan. Let’s see what are the three reasons for that.

37-year-old Dinesh Karthik made his debut in the Indian cricket team in 2004. His opportunities in international cricket have been on and off. If DK says that’s all, he will give a comeback and show mass in the next moment. He will suddenly do commentary work. He will be the captain in the IPL field. Now he has reserved a place for himself in the Indian T20 team.

In terms of international T20 cricket, he has played a total of 48 matches. He batted in 40 innings and scored 592 runs. His strike rate is 139.95. Pavilion has returned as a not out batsman 19 times. Apart from this, he has played 229 matches in the IPL field. He has scored 4376 runs with it.

Dinesh Karthik has been included in the Indian team for his role as a finisher. There is no chance of him doing this against the Pakistan team. However, before this he had done his job well against the South African team last June. In a match in that series, the Indian team would have lost 4 wickets for 81 runs. DK and Pandya partnered for the fifth wicket and attacked the opposition’s bowling. Expect that kind of performance from him in the coming days. This is also his role in the team.

Great game against fast bowlers: DK has a quality record against pacers. He has accumulated 258 runs against fast bowlers. In this his average is 86. Strike rate is 224. Often in the death overs, captains ask the fast bowlers to bowl. Then DK batting for the Indian team will be good for the team. He also plays well against spin.

Experience will speak: The pressure is very high in T20 cricket. DK is a player who has handled this kind of pressure with experience. He has been watching the evolution of T20 cricket from the sidelines since the first international T20 tournament played by the Indian team.

Mainly as a finisher role, the Indian team will be a big help in the championship title in series like Asia Cup and T20 World Cup. A quality and experienced player is required to play that role. Jadeja’s left-right batsman combination in the playing XI would have been the right choice to play DK in the middle overs.

Crazy Form: Mainly DK is in great form right now. In the 14 international T20 innings he has played in the current year, he has faced more than ten balls 5 times. It included 30, 55, 12, 41* and 7 runs. He has shown amazing form in the IPL 2022 season. Now he is carrying it in the international arena as well. He is also expected to take a place in the playing XI for the upcoming T20 World Cup series as he looks after the wicket keeping duties. However, it will depend on his performances against Australia and South Africa in the Asia Cup.