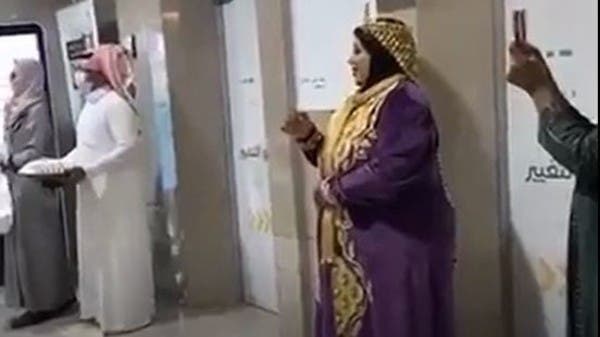 Saudi Arabia, “Umm Ayed”, famous for her work in weddings, sparked widespread controversy when she received the Minister of Human Resources and Social Development Ahmed Al-Rajhi on the “Men’s Day” program, chanting expressions of praise for the minister, to resound the place with her resounding arrogance.

Umm Ayed’s position was documented by a popular video on social media platforms, for tweets opposing this position, considering that it was a waste of money without benefit for such programs, while Umm Ayed denied receiving any financial amount.

At the same time, the responses of some employees of the ministry came on the communication platforms, that the presence of the famous “Umm Ayedh” was an individual diligence of a new employee, and she will be subject to accountability and investigation as stipulated by the regulations.

In the context, Umm Ayed revealed in an interview with the media, that there was prior coordination with her 15 days ago, for her presence and welcoming the minister, and said, “I attended at the appointed time, and I entered the site at half past seven in the morning, and I did my duty to receive and welcome the minister and all the attendees, Without objection from anyone, she indicated that she was just invited to participate in the reception of the minister, and she did not receive any financial payments.

While Umm Ayed denounced the attack and the reaction to her, citing that what she did was her normal and well-known work on occasions and weddings.