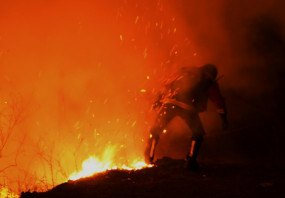 Digital Desk, Paris. At least 36,000 people have fled their homes in the past week as wildfires raged in southwestern France. Also 20,600 hectares of land has come under fire.

Macron called the firefighters heroes and thanked the French people for their solidarity with the police and firefighters in the Gironde department to control the fire.

He described the July 12 forest fire as one of the most serious in the history of France and the air units of the country’s fire brigade, the most modern in Europe.

Firefighters said the fire alert alert in Gironde would be extended till October.

Local officials told BFMTV that both the fires were brought under control on Tuesday night and that rising humidity would help douse the blaze in the coming days.