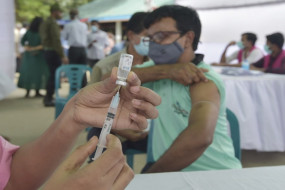 digital desk, Dhaka. Bangladesh will deliver 40 million doses of Kovid-19 vaccines every month from January next year. A minister gave this information.

According to a report by the leading local news agency UNB, Health and Family Welfare Minister Zahid Malek said, “We are taking the initiative to provide the vaccine in every ward of the country from next month.” Hopefully we will be able to meet our targets by next May-June.

Malek said that the world has praised Bangladesh for its handling of the Kovid-19 Pandemic.

On the proliferation of new Omicron variants, the minister warned that vaccines alone cannot stop its growth.

Lokman Hossain Mian, senior secretary of Bangladesh’s Ministry of Health and Family Welfare, told reporters that priority would be given to frontliners and the elderly for booster shots.

Bangladesh launched the COVID-19 vaccination campaign in January to contain the nationwide pandemic.

According to the data released by the Directorate General of Health Services (DGHS) on Wednesday, about 120 million vaccine doses have been given so far.

UNICEF said on Wednesday that it has given more than 100 million COVID-19 vaccines to Bangladesh since June 2021.