Will the government do the same for what Aurangzeb did? – Question by Professor Irfan Habib in an interview with ‘Hindu Tamil’ daily 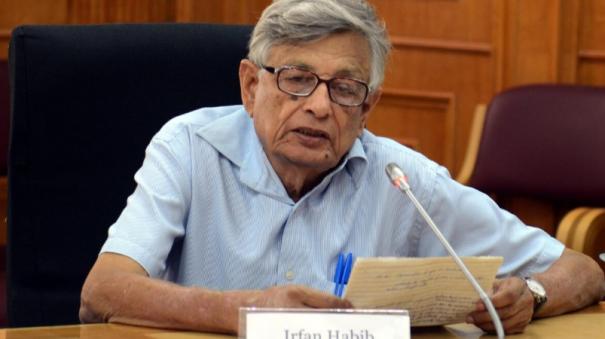 New Delhi: Will the present government do the same for the fact that Aurangzeb demolished the temples of Kasi and Mathura? As questioned by history professor Irfan Habib (90).

Irfan Habib is the recipient of the Padma Bhushan, an internationally acclaimed Mughal historian. Aligarh is an Senior Professor in the Department of History at the Muslim University. Here is an interview he gave to ‘Induthamil’ daily, a non-religious left-wing thinker:

Is it true that the Shiva temple was demolished by the Mughal emperor Aurangzeb and the Gyanvapi mosque was built?

It is true that Aurangzeb broke temples during his reign. His government notes, ‘Alamkirnama’, contain historical evidence that such actions were not carried out in secret. But it is not certain that it was the Shiva temple that was broken into in Varanasi. It is said that the Shiva temple was found there. Otherwise, it may be the temple of other gods. However, did Aurangzeb build the Gyanwapi Mosque there? I do not know.

Now what is your opinion on the alleged demolition of Gyanwapi to rebuild the temple?

Sculptures and stones of Buddhist monasteries are found in temples and mosques built during that time. Do they have to be broken again for this? This is an act of ignorance. It is true that Aurangzeb demolished the largest temple of Keshav Rai built by Veer Singh Bundela in Varanasi and Mathura. Should the present government do the same because Aurangzeb demolished it in 1670 AD? Such an act is against the Preservation of Indian Archaeological Monuments Act, 1958. Accordingly, they must be protected and not broken.

Are there any allegations that the Krishna Janmabhoomi temple in Mathura was demolished and a mosque built?

Similarly, what is the reason for the complaints that Mughal mosques should be demolished now?

The demolition of the Babri Masjid in 1992 has led to such complaints. The Supreme Court allowed the construction of a temple there and the road to the new temple was uneven. No one expected the reason given in the case (in terms of trust) to allow the construction of the temple, dismissing the evidence presented by the court.

What is the truth behind the Shivalingam found in Kianwabi’s Osukana by both Hindus and Muslims?

Will Shivalingam become whatever is available in Gyanwapi’s Osukana? There is no mention of Shivalingam in the petition filed earlier in the Gyanwapi case in Varanasi. What is found now is called Shivalingam. At that time, symbols and stones for the temple were available in the mosque due to the custom that existed during the construction of the shrines. So what problem is going to arise?

Are the temples of those times also said to have demolished the shrines of other religions?

Similarly, if you search the temples of the country, you will find Buddhist monasteries in many of them. These may have been monasteries of Buddhism. Therefore, the demolition of existing places of worship would mean the demolition of many important Hindu temples in the country. There is an ancient monument in the fort of Rana Pratap Singh’s Chittor in Rajasthan. The angels at the bottom of it, and at the top, ‘Allah! Allah! ‘ As engraved in Arabic script. Will it become a mosque for this?