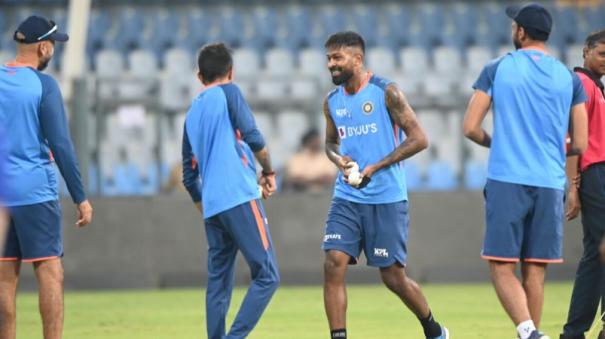 Mumbai: In the absence of Virat Kohli, Rohit Sharma and KL Rahul, Hardik Pandya, as the full-time captain of the Indian cricket team, faces the 3-match T20I series against Sri Lanka.

The Sri Lankan cricket team has toured India to play T20I and ODI series of 3 matches each. The first match of the T20 series will be played at the Wankhede Stadium in Mumbai tonight at 7 PM. With the ODI Cricket World Cup series to be held later this year, it is believed that the Indian team management will not give much priority to the T20 international cricket matches.

However, the series against Sri Lanka may help the Indian team management start some plans now to build a strong team led by Hardik Pandya for the 2024 T20 World Cup. As part of this, India will face the Sri Lankan team without star players like Virat Kohli, Rohit Sharma and KL Rahul. Hardik Pandya-led India won the rain-affected T20I series against New Zealand recently. This has increased the expectation on him. The problem with the Indian team in recent times is the reluctance to attack fearlessly. This is the reason why the performance of the Indian team in the T20 World Cup has decreased.

Ishan Kishan and Ruduraj Gaekwad are likely to be the openers for India in today’s first T20I match against Sri Lanka. The pair are likely to add runs in a big way as the Wankhede pitch will favor the batting. Both of them have performed well in the IPL over the past few years. Now they have a way to work independently without worrying about their place in the team. The next T20 World Cup cricket series is at least 18 months away. And this year the Indian team is expected to participate in at least 15 and T20 matches. Thus Ishaan Kishan and Rudruraj Gaekwad pair may be inclined to put up a consistent performance.

Shubman Gill is yet to debut in T20 Internationals. The team management might think about fielding him at number 3. Suryakumar Yadav, who is ranked number 4 in the ICC T20 rankings, could add a lot of strength to the team. Deepak Hooda may also get a chance in the playing XI if a 6th bowler is deemed necessary. The team management may prefer to field Sanju Samson over Rahul Tripathi given his experience in the middle order.

Similarly, Shivam Mavi and Mukesh Kumar rarely get a chance in the opening game. Because Arshdeep Singh, Harshal Patel, Umran
Malik is in the team. Yuvendra Chahal is likely to be the main spinner. Washington Sundar or Axar Patel will be in the all-rounder line-up. Sri Lanka, the defending Asia Cup champions, may try to put up a good show on the Indian pitches. Avishka Fernando, Shamika Karunaratne and Satira Samarawickrama, who performed well in the Sri Lankan Premier League, have been given a place in the team. Banuka Rajapaksa is expected to perform well in the midfield.