Will the parliamentary deadlock end?- Continued talks with opposition parties 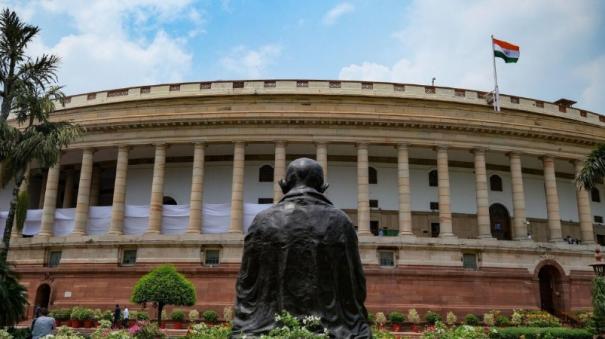 New Delhi: Will the deadlock in the Monsoon Session of Parliament, which ends on August 12, come to an end? It is not clear yet. For this, the friendly negotiations of the BJP leaders with the opposition parties are continuing.

The parliamentary session started last July. Since the first day of this, the opposition parties have been paralyzed due to violence. Initially, four Congress members of the Lok Sabha were suspended throughout the series. Later, Aam Aadmi Party’s Sanjay Singh joined the Rajya Sabha in this list.

Meanwhile, 22 members of the Rajya Sabha were suspended for a week in subsequent days. In this, Congress, Aam Aadmi Party, Trinamool Congress and Left were present along with six members of DMK.

The suspension of these 22 members ended last Friday. However, the suspension of 4 members of the initially suspended Lok Sabha and one member of the states continues till August 12.

The Center is trying to end the stalemate by the opposition throughout the monsoon session. For this purpose, friendly talks with opposition leaders are continuing on behalf of BJP.

It has been reported that JP Natta, the national president of the BJP, and Prahalad Joshi, the Union Minister of the Parliamentary Affairs Department, are playing an important role. In this, it seems that the central government is ready to hold the debates insisted on by the opposition parties in both of them.

However, the problem is thought to be lingering in overturning the order of the five suspended members throughout the series. Some of the conditions put forward by both sides have become a problem.