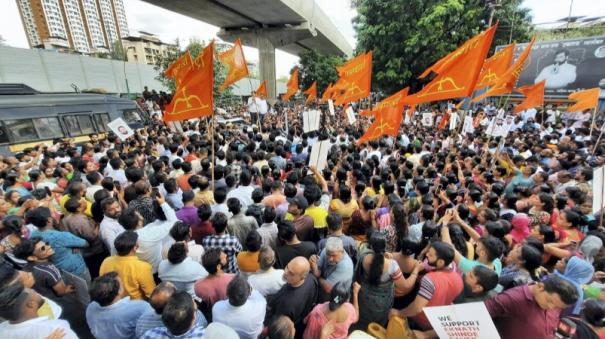 New DelhiMaharashtra, Shiv Sena coalition government in danger of overthrow, Union and state ministers have issued comments. Because of this, controversy has arisen over the possibility of a law and order issue and the imposition of presidential rule.

In Maharashtra, the Shiv Sena has a coalition government with the support of the Congress and the Nationalist Congress Party. On top of this, the ruling coalition lost one member in the June 20 election. In the previous state assembly elections, some Shiv Sena, minor party and independent MLAs also voted against. The issue that started then pushed the Shiv Sena to the point of overthrowing the government.

Led by Shiv Sena senior leader and minister Eknath Shinde, 40 MLAs are pushing for the overthrow of the government. State Chief Minister Uttam Thackeray has stepped down in an attempt to prevent this and protect his government.

He is backed by coalition leader Sarath Pawar. In it he said he could convene the legislature and prove a majority. This was followed by violent remarks by Union and state ministers.

Speaking in a threatening tone, Union Minister for Small Industries Narayan Rane said, “Sarabjit Pawar will not be able to leave his home if he tries to defend the regime.” Responding to this, senior Shiv Sena leader and Power Minister Nitin Rawat said, “If there is any danger to the regime, Mumbai will be plunged into riots.” Their violent comments have sparked controversy as to whether the President’s rule will take effect after the overthrow of the Shiv Sena regime.

In turn, security has been beefed up across the state of Maharashtra. This is due to the suspicion that the Shiv Sena is likely to stage protests across the state. There are fears that their protests could lead to riots.

This is because the Shiv Sena has attacked the offices of some of the disgruntled Shiv Sena MLAs in Mumbai and Pune.

This situation has intensified in the aftermath of the coup and fears of a law and order crisis have arisen. This has led to fears that the federal government may recommend the president to the government.

However, the rule of Maharashtra is expected to continue for a few more days. This is because both Chief Minister Uttam Thackeray and Maharashtra Governor Bhagat Singh Kosaria have been infected with the corona. Governor Koshyari has been admitted to a Mumbai hospital.