Will Virat Kohli play in T20 after World Cup series? 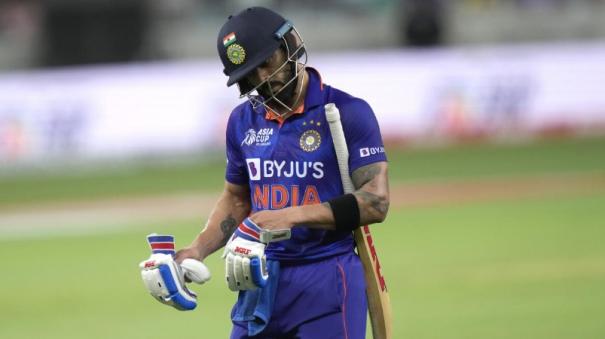 New Delhi: There have been questions in the cricket circles whether Indian cricket team’s star player Virat Kohli will play T20 matches after the T20 World Cup series.

Virat Kohli, the world’s greatest batting player, has been struggling for the past 3 years. In T20 cricket, which can have an impact, there has been an opinion that Virat Kohli’s batting approach is not up to the standard of modern times. Virat Kohli adds 20 or 35 runs in T20 format. But the talk of the town is that his strike rate is not great.

This opinion is believed to have started since the Indian team left the T20 World Cup last year without advancing to the knockout round. This match was the last T20 series captained by Virat Kohli. Virat Kohli gave up the captaincy in the T20 format only to reduce the workload. Virat Kohli’s decision did not pay off. Virat will continue to be the captain of ODI cricket
Snatched from Kohli. After this, Virat Kohli resigned from the captaincy of the Test team. Recently, Virat Kohli shared about the stress problems he faced during the matches played after this.

At the age of 33, Virat Kohli has played 464 international cricket matches and is considered a big deal. However Virat Kohli this year
He has scored 17, 52, 1, 11 and 35 runs in the last 5 T20 International matches. He scored 17 runs in 13 balls, 52 runs in 41 balls and 35 runs in 34 balls. What India need right now is not half-centuries in every game, but 35 runs off 20 balls.
A must score of 20 runs in 10 balls. According to statistics, Virat Kohli’s strike rate does not even cross 100 in the 6 to 14 overs which are bowled at a slower pace. This is where the drift begins.

The T20 World Cup will be held in October. Before this, the BCCI side or the Indian team management may talk to Virat Kohli. Virat Kohli is likely to take a major decision on the T20 format after the World Cup, though perhaps not yet decided. The result may be that Virat Kohli will focus more on ODIs and Tests apart from T20Is. Because the next 50 Over World Cup is being held in India. And in the next 5 years, the Indian team will play 38 Test matches.