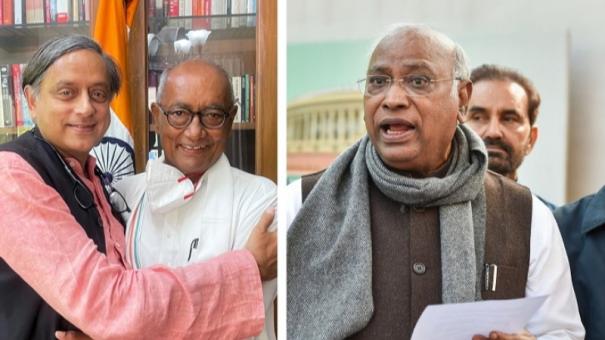 New Delhi: There are reports that senior leader Mallikarjuna Kharge is going to join the Congress president election as a last minute addition. Senior party leader and Congress Election Committee chief KC Venugopal is seen to have told Kharge last night that he is the party’s preferred choice and asked him to file a petition.

A three-way contest? The election for the post of Congress president will be held on October 17. Filing of nomination for this started on 24th. Senior Congress leader and Thiruvananthapuram MP Shashi Tharoor is contesting the elections. He said that he is going to file the nomination today, which is the last day.

In this context, senior Congress leader and former Madhya Pradesh Chief Minister Digvijay Singh is also contesting for the post of President. “I will formally file the petition on Friday,” he said yesterday in Delhi.
Meanwhile, Mallikarjuna Kharge is also expected to join the match today. It seems likely that Mallikarjuna Kharge, who is the Leader of the Opposition in the Rajya Sabha, will resign from the Rajya Sabha post if he is selected for the post of Congress president. Digvijay Singh and Sasi Tharoor are expected to file the petition by 3 pm today.

Apart from these, the names of Bhupendra Singh Hooda and Prithviraj Chavan in the G23 group are also being contested for the Congress president election. It is worth noting that the G23 leaders’ consultative meeting is also being held today. Scrutiny of nominations will be held on October 1 and the list of candidates will be published on that day. 8th is the last date for withdrawal of nominations. Finally, the polling is going to be held on the 17th. 9,000 Congress party executives are eligible to vote. Voting will be held from 10 am to 4 pm on October 17 at the respective state headquarters. The results will be declared on the same day.

Is Priyanka responsible for Khelat’s exit? While there is talk in political circles that the election of the Congress president is the only attempt to revive the party, Ashok Khelat, who was wanted by many in the party, has announced his withdrawal from the contest. The reason for that is because the party supremo nominated Sachin Pilot as the chief minister of Rajasthan. Priyanka Gandhi is also said to be behind this. It seems that the idea of ​​making Sachin Pilot the Chief Minister of Rajasthan was proposed on Priyanka and Rahul’s wish and that is why Khelat quit.