With balloons and roaring engines, Kerkrade says goodbye to Gino (9): ‘He would have looked with big eyes’ 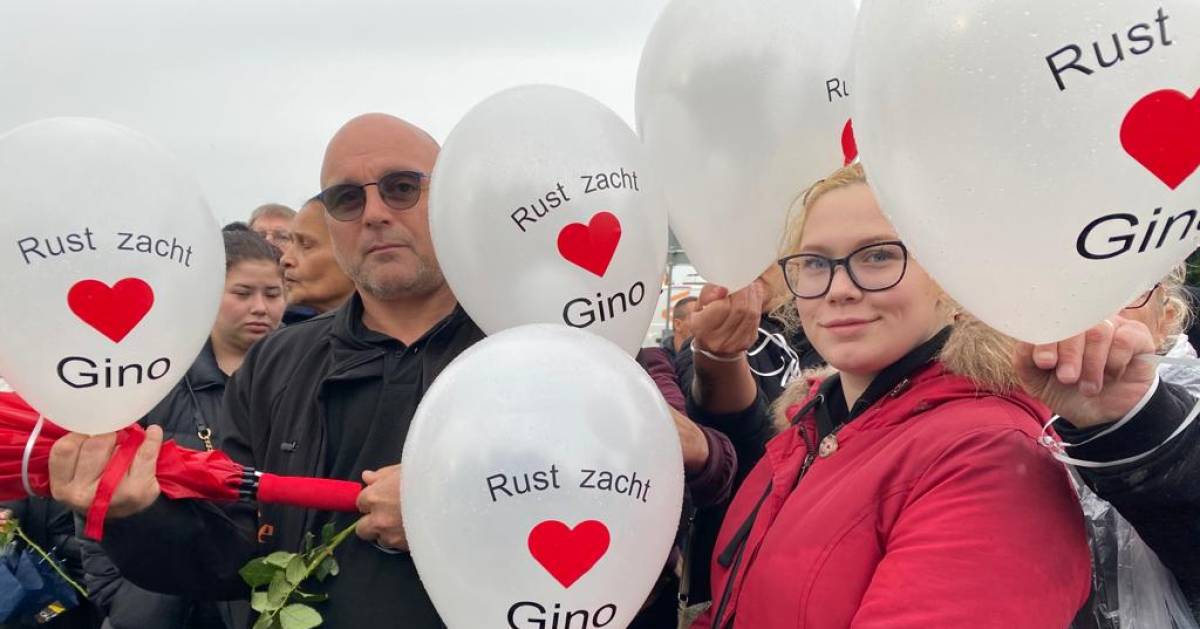 with videosThousands of people said goodbye to 9-year-old Gino tonight in Kerkrade during a special memorial tour. Along the route, sturdy cars and motorcycles formed a guard of honor for the boy who was found dead in Geleen last Saturday. He was murdered.

From a roundabout at the German border, relatives, friends, acquaintances and local residents walked in a long procession to the playground on Hertogenlaan in Kerkrade where the boy disappeared on Wednesday evening. There has been great despair here for days. A sea of ​​flowers, cuddly toys and candles has arisen on the playground.

Gino’s sisters and mother lead the procession, followed by people with flowers and balloons. Relatives wear T-shirts with a picture of Gino on their chest. About two hundred cool and beautiful cars and motorcycles form a guard of honor along the route. Gino loved these types of vehicles, according to his family.

When the family arrives at the playground where Gino disappeared around 8 p.m., the song sounds Amazing Grace† There they lay flowers, while the tears flow. At the playground, Naomi van der Straeten (21), a sister of Gino, gives a short speech, supported by her sister Kelly. Sometimes barely intelligible through the tears, she tells about her brother, the cheerful boy who just before disaster struck did what so many children love to do: play football outside. “As a family we are completely defeated and terribly sad. We kept hoping until we heard that Gino had been found.”

On behalf of the family, Naomi thanks everyone who helped with the search and who was present at the farewell. “It is impossible to thank everyone personally for the help, sincerely and from our hearts. The grief about Gino is enormous and does not diminish because of this, but all the attention does us good. Gino would have loved this tour. This is a beautiful goodbye. If Gino had been here, he would have looked wide-eyed. This is how we want to remember our brother, our sweet cheerful child.”

The mayor also speaks and thanks everyone who was present and helped with the search. “Your support shows the family that they are not alone. She wishes the family all the best. “Julie Gino will forever have a place in our hearts.” At the end there is singing and balloons are released. Many children lay down flowers.

The commemoration is intended to give everyone from Kerkrade and the surrounding area who has been touched by the tragic news the opportunity to say goodbye to Gino. The funeral is private. For people in the area it is an opportunity to close the case somewhat,” said a spokesperson for the family.

Nicole Huppertz and Sjoukje Verheijen from Kerkrade did not have to think long when they saw the call to form a guard of honor with motorcycles and special cars. “I also have children of my own. This could have happened to me too.” And so she now stands with her motorcycle with a Fortniteshirt from her son along the road, because Gino really liked this computer game.

Claudia Hofland and Joyce Sentjes from Landgraaf searched for hours on Friday for the then still missing Gino. In vain, they now know. Saturday morning they shed a tear when the tragic news came that the boy had been killed. Tonight they are back in Kerkrade, this time to pay Gino one last tribute. With white roses and stuffed animals from Sentjes’ own children. “It’s the last thing we can do for him, but at the same time it’s very sad that he can’t see this anymore.”

The members of rescue dog brigade MTL are also there. They searched for Gino almost continuously for three days after the disappearance with sniffer dogs. “Unfortunately, we have not found him, but this is the last thing we can do for him,” says coordinator Patricia Spee.

Frans Lemmers built his green Seat for six years and lives in Kerkrade. He didn’t know Gino personally, but it could very well be that the boy – crazy about special cars – saw him drive once. ,,I live a five-minute drive away and there is only one such car in Kerkrade. If you live so close, and this is the last thing you can do for him, then you should just stand here.”

But also car enthusiasts who live further from Kerkrade had a two-hour drive and an empty petrol tank to form a guard of honor with their BMW V10. “If this is the last thing we can do for him, I’d like to stop working a few hours earlier,” says Nick Everts from Zevenaar.

There will be a silent tour in Maastricht on Thursday. Gino lived in this city until he was forced to stay with his older sister in Kerkrade two weeks ago because of his single mother’s illness. Participants in this silent tour are asked to bring lamps, lights and lanterns to put Gino in the light. Gino was afraid of the dark, which is why many children also light lights in front of the house on the Gildenweg in Maastricht.

Gino was last seen in Kerkrade last Wednesday evening, three days later he was found dead in Geleen. According to justice, he was murdered. For this, 22-year-old Donny M. from Geleen was arrested and arrested.

The news that Gino has passed away hits the residents hard. A sea of ​​flowers has arisen at the playground where he was last seen: