With the advent of May, this is how “Abha” turned into violet forests 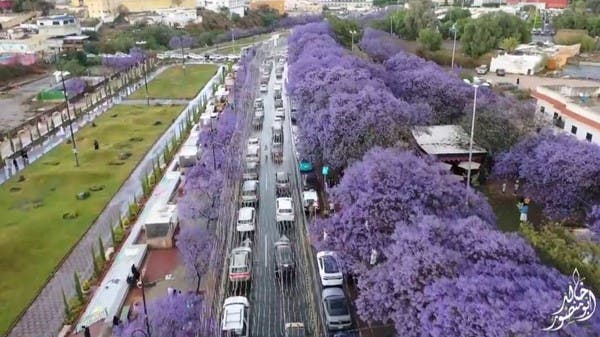 The Jacaranda tree transformed the Eid season in the city of Abha into a world of astonishment with its striking violet color, and because of the effect of this tree on the streets, which turned it into surreal paintings from the world of imagination. There were expressions of joy.

Hundreds of families gathered around these trees on Art Street in the center of Abha, which is considered the most prominent “jacaranda” site in the Asir region for hiking, and spending Eid days amid a forest of bright purple and purple flowers, amidst its remarkable density, to be a destination for those seeking the beauty of nature and spending fun times in the forests. Violet, documenting the aesthetics of the place.

The secretariat of the Asir region has worked to support the initiative of Crown Prince Mohammed bin Salman, which carried the slogan “Green Saudi Arabia”, by planting 25,000 jacaranda trees in Abha, which, with its beauty and fragrant aroma, adds an aesthetic dimension to the city’s gardens, streets, roads and squares, with its beauty and fragrant aroma.

The Jacaranda is one of the most beautiful trees in the world with bright purple flowers that take the form of doves combined in a unique and attractive appearance. In addition, it forms a bright spectrum on the beauty of nature in the city, and its moderate climate is suitable for such trees, as its dense branches are covered with purple and purple flowers that exude their fragrance. around the place.

The Mayor of Asir region, Dr. Walid Al-Hamidi, said that it continues to bloom for a period of up to 8 weeks, and gives a distinctive aromatic smell that spreads after the rain, noting that, in accordance with the initiatives of the Crown Prince regarding afforestation, the region’s secretariat has planted one million seasonal roses in several locations in the city, pointing to The jacaranda tree, with its bright purple color, will decorate the streets and gardens during the spring and early summer.

He added, the region’s secretariat operates according to the vision of the Crown Prince and based on its annual plan related to planting trees and flowers in the region; With the aim of enhancing and diversifying the vegetation cover, planting the tree enhances the vegetation cover and beautifies the city and its streets, as well as a source of oxygen and a tourist attraction for the region. Little water, and no threat to infrastructure.

Jacaranda in the streets of Abha

The Jacaranda genus includes about 45 species between trees and shrubs, which are deciduous trees in areas that are exposed to periods of severe cold, and evergreen in temperate regions, and this plant belongs to the “Bignon” family.

The tree grows to reach a height of more than 18 meters. It is fast-growing and may reach a height of 3 meters during the first year. The shape of its spread is irregular or silhouetted. The spreading density is open and the growth rate is high. It is grown for shade and decoration in the streets and in public parks.

The fruits of the “Jacaranda” are formed in the form of a dry, hard, brown round pod ranging in size between 1-3 inches and usually develops in late summer, where thin seeds are formed inside.

This tree reproduces naturally by seed in March and April, and it can also be planted with seeds throughout the year if it is in a protected area, or it is cultivated by some modern methods such as sprout pots or indoors until it becomes strong, or by cuttings in February and March, and it must be fertilized, especially in the period of active growth at least Once a month, it is preferable to prune the ends of its upper branches until the growth intensifies and the temperature suitable for germination is between 19 to 27 meters, and seedlings often take a long time to flower compared to grafted trees.