Work in progress.. 6 new minarets in the Grand Mosque 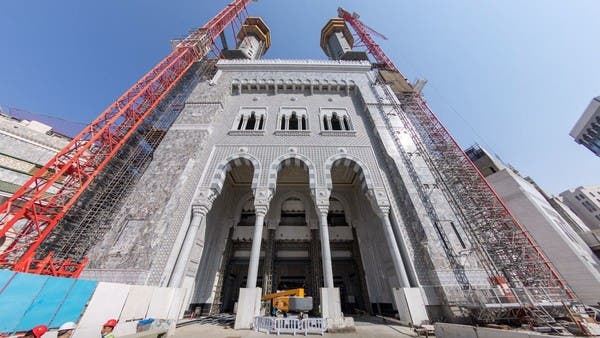 The Agency for Projects and Engineering Studies confirmed that, in conjunction with the severity of the Corona pandemic, the suspension period for Umrah and prayer, and the small number of worshipers, the General Administration of Projects intensified its work in the third Saudi expansion and the Grand Mosque.

In turn, the Deputy General President for Projects and Engineering Studies, Engineer Muhammad Al-Waqdani, explained that the construction works are continuing at a high pace, as the completion rate of the construction work in the two minarets of King Abdulaziz Gate has reached more than 88.5%, adding that the finishing works (marble columns, decorations and walls) amounted to 98. 100%, and also included the installation of ceilings 100%.

From the work of the new lighthouses

He also indicated that the agency benefited during the last period due to the low density of worshipers and pilgrims and by supervising several projects in parallel, the most prominent of which was the work of the bishop in the Mataf building, where the completion rate of the bishop in the courtyard of the courtyard reached 50%, and the ground floor 30%, and reached 5% in the first floor, and that The completion rate of Bab Ismail (the external facades of marble works) exceeds 85%, in which 100% precast concrete installation works were carried out, while the northern facades are 70%.

In addition, he pointed out that the completion of the 6 beacons brings the total number of them to 19, which embodies the patronage of the Kingdom of Saudi Arabia since the era of the founder King Abdulaziz, all the way to the era of King Salman bin Abdulaziz in the service of the Two Holy Mosques and their destination, indicating that these expansions The giant giant has not been seen for 1,400 years, he says.