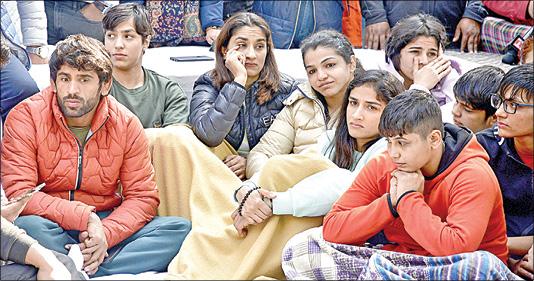 Meanwhile, the Union Ministry of Sports has sent a letter to the Indian Wrestling Federation asking for an explanation regarding this issue. In it, it has been stated that “the allegations should be answered within 72 hours. Failure to do so will result in action.”

While the athletes were fighting for the 2nd day yesterday, in the morning some wrestlers were called by the officials of the Union Ministry of Sports. As they were not satisfied with this, the protest continued.

Vinesh Bhoga said, “On the 2nd day of our protest, we did not get a satisfactory response from the government. Let us ensure that Brij Bhushan Charan Singh resigns and goes to jail. We will file a case against him,” he said.

Delhi Women’s Commission President Swati Maliwal has issued a notice to the Delhi Police and the Union Sports Ministry seeking an explanation after star wrestlers Sakshi Malik, Vinesh Phogat and Bajrang Punia made allegations against the officials and coaches of the Indian Wrestling Federation.

Meanwhile, the Executive Committee and Annual General Body meeting of the Wrestling Federation of India is scheduled to be held on the 22nd in Ayodhya, Uttar Pradesh.

Sidharth Kiara wedding: Whammo Siddharth – Kiara is spending all the crores for the wedding!