Yemen.. 170 Houthi violations of the UN armistice in two days, and 21 soldiers were wounded 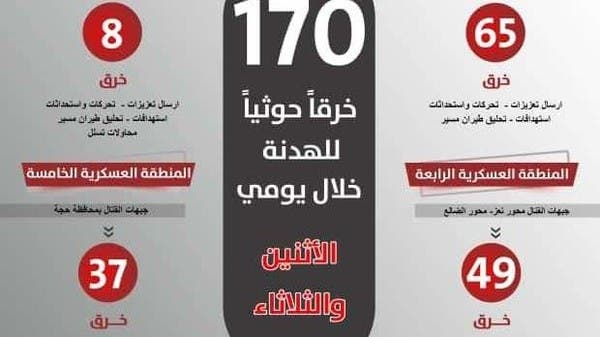 The Yemeni army said, on Wednesday, that the Houthi militia committed 170 violations of the UN armistice, in two days, and wounded 21 soldiers.

A statement issued by the media center of the Yemeni army stated that the Iranian-backed Houthi militia committed 170 violations of the UN truce on Monday and Tuesday (6-7 June) on the fighting fronts in the governorates of Marib, Hajjah, Hodeidah, Taiz and Al-Dhalea.

He stressed that the Houthi violations resulted in the injury of 21 soldiers of the National Army forces with snipers’ bullets, booby-trapped drones and artillery shells, of whom 8 were wounded on Monday and 13 others on Tuesday.

The statement indicated that the Houthi violations varied between attempts to infiltrate, direct firing with heavy and medium weapons, creating sites, building roads, and deploying artillery and bullets.

The Houthi violations also included the recruitment of human reinforcements and combat equipment, including tanks, as well as the deployment of reconnaissance aircraft on various fronts.