Yemen..Deaths, bombing of residential villages and downing of a Houthi march within the armistice violations 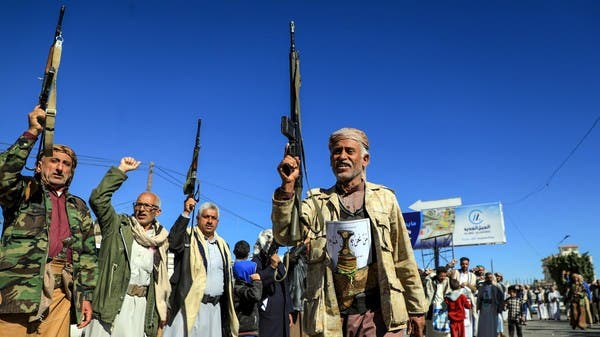 A soldier was killed and another wounded, on Monday, as a result of artillery shelling by the Houthi militia targeting a military position of the Yemeni army forces in Al-Jawf Governorate, in the northeast of the country, as part of the militia’s escalating violations of the UN armistice announced in early April.

The media center of the Yemeni army said that the Houthi militia targeted a military position of the army forces on the Jadafer front, east of Al-Hazm district, the center of Al-Jawf governorate, with a shell, killing one soldier and wounding another.

The Yemeni army also announced that it had shot down a Houthi drone while it was flying towards military sites in the northwestern front of the Marib Governorate.

The Houthi militia continues its daily attacks on army positions, pushing vehicles and tanks to the front lines and creating trenches, taking advantage of the humanitarian truce that began in early April.

In this context, the terrorist Houthi militia launched, on Monday, a bombardment of various types of weapons, targeting residential villages in the west of Taiz Governorate, southwest of Yemen.

Local sources said that the Iranian-backed Houthi militia bombed – on the first day of Eid al-Fitr – inhabited villages in the districts of Al-Ta’aziah and Jabal Habashi with various types of weapons.

According to the sources, artillery shelling and Houthi militia snipers prevented the people of these areas from performing the Eid prayer or rejoicing in it.

The terrorist Houthi militia deliberately launches its missile attacks targeting populated areas and neighborhoods in the city of Taiz and its rural outskirts, as part of its continuous violations of the humanitarian truce sponsored by the United Nations.