Yemen demands an end to Iran’s interference, and warns of a Houthi threat to navigation 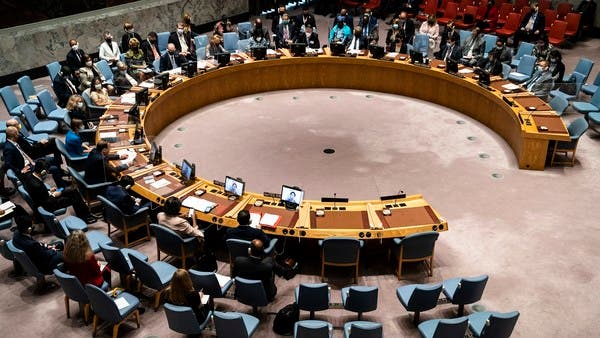 The Yemeni government called on the UN Security Council to stop Iran’s blatant interference and violations, and warned of the danger posed by the Houthi militia to international shipping lanes in the Red Sea and Bab al-Mandab, the vital sea lane for the global economy.

Yemen’s statement before the Security Council session, which was held yesterday, Wednesday, affirmed that “the intransigence of the Houthi militia would not have continued without Iranian support and guidance, which continued to kill Yemenis to serve its expansionist agenda in the region.”

“Independent investigation teams have proven, and irrefutable evidence, the Houthi militia’s use of civilian facilities, including Sanaa Airport, for military purposes, storing weapons, launching ballistic missiles and drones, in addition to smuggling weapons,” he added.

The statement presented by the representative of Yemen to the Council, Abdullah Al-Saadi, considered the Houthi militias’ adherence to the option of war and the repeated targeting of civilians and civilian objects in the Kingdom of Saudi Arabia, “an indication that they and the Iranian regime behind them are not serious about engaging in the political process and dialogue, and peace was not an option for them.” He indicated that these militias have no goal other than to implement the agenda and dictates of the Iranian Revolutionary Guards and the experts of the Lebanese Hezbollah.

Al-Saadi renewed the warning of the Houthi militia’s danger to the safety of international maritime navigation in the Red Sea and the Bab al-Mandab Strait, adding: “The commission of piracy by these militias, the latest of which was the kidnapping of the civilian cargo ship “Rawabi” bearing the flag of the United Arab Emirates, constituted a dangerous development and evidence of the The warnings we have gone to.

He stressed that this act represents a threat to maritime traffic and global trade… calling on the Houthi militias to immediately release the ship, its crew and its contents without any conditions or restrictions.

He also called on the international community and the Security Council to take firm stances towards these hostile and terrorist practices of those militias that provide daily bright evidence of their aggressive behavior to destabilize security and stability in this vital region of the world and threaten regional security and the movement of the global economy and international trade corridors.

On the situation of the tanker Safer, the representative of Yemen renewed the warning of its danger to the environment of the Red Sea and international shipping lines, and said that the Houthi militia continues its intransigence and blackmail to the international community, ignoring the danger posed by the tanker’s situation to Yemen and the region.

He pointed out that “studies have proven that wind currents and sea currents during the months we live in today are the best and may be the only opportunity to intervene and avoid disaster,” calling on the council “to take all necessary steps to stop Houthi intransigence and start taking the necessary measures to assess the situation of the tanker to avoid oil leakage or its explosion.” Before it’s too late”.