WorldYemen.. Dozens of Houthis were killed, including leaders on the Marib fronts
World

Yemen.. Dozens of Houthis were killed, including leaders on the Marib fronts 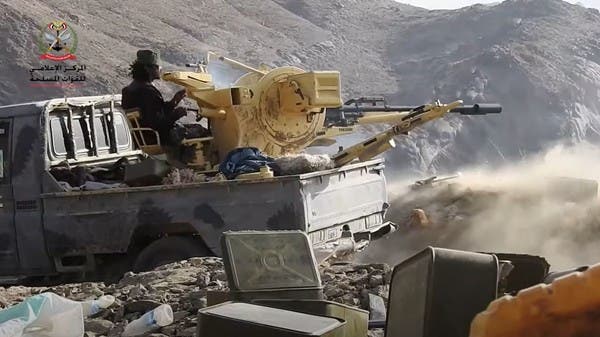 Violent battles continued between the Yemeni army forces and the Houthi coup militia, on a number of fighting fronts in the vicinity of Marib Governorate, in the northeast of the country.

Field sources confirmed that the Houthi militia had incurred, during the past hours, great human and material losses at the hands of the National Army and the raids of the Coalition to Support Legitimacy.

Identical field and media sources revealed the killing of a prominent Houthi leader from the family of the militia leader, along with a number of his companions, and the injury of others and families in these battles.

And it reported that the Houthi leader, Mustafa Hammoud Sharaf al-Din, impersonating the rank of brigadier general of the rapid intervention commander, was killed along with all his companions, in the Murad front, southwest of Marib.

The sources indicated that the leader, Sharaf al-Din, is the son-in-law of the militia leader, Abdul-Malik al-Houthi.

Dozens of the Houthi militia were also killed in the battles of the past hours on the Al-Mashjah front, west of Marib.

Military sources said that the militia attacked with huge numbers of people, most of whom were killed by the fire of the National Army and the resistance.

Simultaneously, the coalition warplanes launched focused raids on the militia gatherings and sites on the western fronts of Marib, which resulted in deaths and injuries and the destruction of a number of the militia’s military vehicles.

In this context, the commander of the Baihan axis, commander of the 26th Infantry Brigade, Major General Mufreh Buhaibah, said that “the National Army, the popular resistance, tribes and citizens of all their orientations are today writing a battle for history,” in defense of Marib.

Buhaibah said, in a video statement published by the Yemeni army’s media center, that “the Houthi enemy opened a new battle over 60 km, and he thought that he would achieve his goal and bypass the region, but his efforts failed in the face of the solidity of the army, the resistance and the tribesmen, and he will remain powerless in the face of the strikes of the heroes.”

He also referred to “the great societal rallying around the army forces by citizens and tribesmen who have no home without being martyred in the battle to defend the homeland and dignity,” he said.

Buhaibah called on everyone to “unify the national ranks and transcend minorities for the benefit of the nation.” Buhaibah also called on citizens and their children “not to be drawn into the illusions of the Houthi militia and to allow it to exploit them and throw them into the crematoriums of death.”

And he valued the direct support and backing of the coalition to support legitimacy led by the sisterly Kingdom of Saudi Arabia, which offers dearly and preciously to support the battle of Arabism against the henchmen of Iran.

The Iranian Houthi militia also received painful blows on the fighting fronts south of Marib, and incurred the greatest losses in equipment and lives.

The media center of the Yemeni army stated that the heroes of the army and the resistance wrote the most wonderful epics and broke the simultaneous attacks launched by the Houthi militia on several axes and forced it to retreat and flee after incurring countless losses.

He stressed that dozens of militia members and leaders were killed or wounded by the fire of the army, the resistance and the tribesmen, pointing out that many bodies of the Houthi militia are still scattered throughout the theater of combat operations, some of them from the battles of the past days.

Simultaneously, the army’s artillery launched a focused bombardment targeting the militia’s movements along the front line, inflicting heavy human and material losses on the militia, including the destruction of two vehicles and three crews, while the coalition aircraft destroyed a tank, a bmb vehicle and four crews, in addition to other losses in equipment and lives.