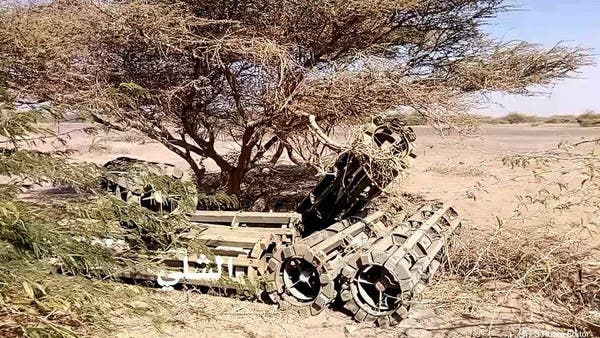 Today, Saturday, the military engineering unit of the joint forces on the western coast of Yemen began clearing the recently liberated areas north and west of Hays District, from mines and remnants of the Houthi war.

And the media of the joint forces quoted a source in the Military Engineering Unit, that the engineering teams are working continuously and intensively to secure the liberated areas and clear them of mines left by the Houthi militia after they were expelled from vast areas in recent military operations.

The source confirmed that the unit was able to extract large quantities of mines and explosive devices, as well as found missiles, various explosives, and a group of camouflaged devices according to the geographical nature and dismantled them within the tasks of normalizing the situation in the liberated areas.

He stressed that the joint forces were able to control the strategic Al-Aden triangle north of Hays, which connects the Hays district in Ibb governorate and the Al-Jarrahi district.

This came in conjunction with the advances of the joint forces in the direction of the city of Al-Barah, the center of the Maqbna district, west of the city of Taiz, hours after imposing fire control over the Al-Barah area after tightening its grip on the strategic Al-Aaraf mountains overlooking large areas in Al-Barah and Hays, south of Al-Hodeidah.

Earlier, Al-Arabiya and Al-Hadath correspondent reported that the Yemeni army had recaptured the Hays district, south of Hodeidah, from the Houthi militia’s control.

The reporter added that the legitimate forces imposed control of the district after violent confrontations against the militias, which incurred heavy losses in the battles.

On Friday night, the southern fronts of the Yemeni province of Ma’rib witnessed fierce battles between the army and the popular resistance on one side, and the Iranian-backed Houthi militia on the other.

The battles are raging on three fronts: the “Dhanna” front on the outskirts of Al-Rawdah in Sarwah, the Laeref front in the Juba district, and the Umm Reish front in Harib.

Field sources confirmed that dozens of Houthi casualties were killed or wounded, in light of the intense air support of the coalition to support legitimacy in Yemen, which destroyed fixed and moving targets for the militias.

It is noteworthy that the Houthi militia had admitted the killing of 14,700 of its members in the Ma’rib battles since last June.

The Coalition to Support Legitimacy in Yemen also announced today, Saturday, the implementation of 15 targeting against militias in Marib and Al-Bayda during the past 24 hours, noting the destruction of an air defense system and 11 militia military vehicles in Marib, and the killing of more than 70 militia members in Marib and Al-Bayda. .

The coalition added: We carried out 19 targeting of militias on the west coast to support the coastal forces and protect civilians, noting that the west coast operations targeted a command and control center, as well as a location for storing and directing drones.

The coalition added: “We support the operations of the Yemeni forces on the western coast outside the Stockholm Agreement texts.”