“You are not my principal; I am the Chief Minister chosen by the people” – Kejriwal’s rant against the Governor 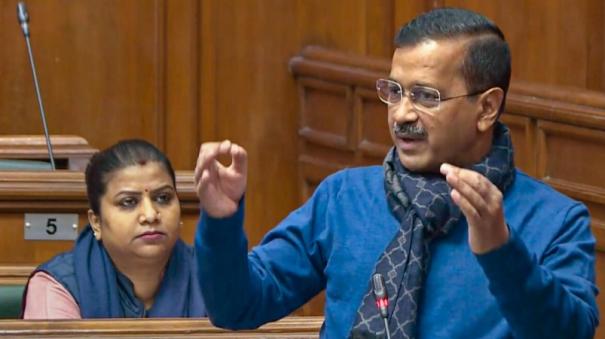 New Delhi: “You (Lieutenant Governor) are not my principal. I am the Chief Minister elected by the people,” Arvind Kejriwal said furiously in the Delhi Assembly.

The Delhi government had planned to send school teachers to Finland for training. It is said that Lieutenant Governor VK Saxena intervened and protested against this decision of the state government. The divorce is being talked about in political circles as the latest in a series of tussles between the governor and the chief minister. Following this, Aam Aadmi Party MLAs, led by Chief Minister Arvind Kejriwal, marched towards the Governor’s House on Monday to protest against the Governor’s interference in the decision of the Delhi government. The rally followed the adjournment of the Delhi Assembly for the day.

Meanwhile, the winter session of the Delhi Legislative Assembly convened for the second day on Tuesday. Speaking in the assembly, Chief Minister Arvind Kejriwal spoke about the issue of Lt. Governor VK Saxena’s opposition to the plan to send Delhi primary school teachers to Finland for training. Reading out the Lt Governor’s reply to the scheme in the assembly, Chief Minister Kejriwal said: “The Governor has asked whether the guidelines of the Labor and Training Department have been followed in this scheme. What is the procedure for sending teachers abroad for training by universities? What has been achieved so far?

Who is this lieutenant governor? He is sitting on our head. Who is he to decide how our children should study? They have prevented our children from studying. The Lieutenant Governor has no power to stop us. Nothing in life is permanent. Tomorrow we can also come to power in central government. Then our government will not harass people.

Even my teachers never checked my homework like the Lt. Governor does. He blames my handwriting and typos. He is not my principal. I am the Chief Minister elected by the people. I said to him (Lieutenant Governor) “Who are you to ask me to study the utility cost of the project? People have elected me.” To which he said, “The President of the Republic chose me.” To which I said, “The British elected the Viceroy. The Viceroys said that stupid Indians do not know how to rule. And now you (Lieutenant Governor) say that stupid Delhiites do not know how to rule.”

In a meeting with the governor, he told me, “BJP won 104 seats in Delhi’s local body elections because of him. Without him, the party could not have won even 20 seats. In the coming general elections, BJP will win 7 Lok Sabha constituencies in Delhi because of the Lt. Governor.”

The Lt. Governor has no independent decision-making powers. Chief Minister Arvind Kejriwal said that the Supreme Court has made it clear that the Lt. Governor has no power to revoke police, land and public orders. Also, showing the list of children of BJP ministers, MPs and MLAs studying abroad, he said in the assembly, “Their children are getting good education”.

Earlier, in a statement released by the Lieutenant Governor on Monday, he said, “I am not stopping teachers from going abroad for training. The government should consider training teachers locally.” He also said, “Any statement is likely to be misunderstood and taken away.”