You will not differentiate .. a robot that looks like a human to an incredible degree! 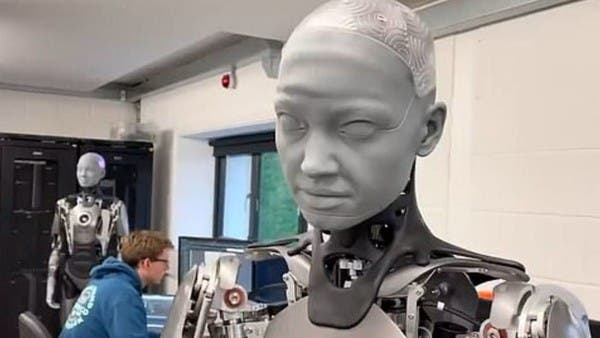 Only a few hours after a British laboratory unveiled one of the most human-like robots, “Amika”, social media became abuzz with the news.

Perhaps the great similarity between the robot and the human being is surprisingly strange, and the information also revealed that it is characterized by an amazing ability to make realistic facial movements and expressions, according to what was published by the British “Daily Mail”.

British company Engineered Arts, which bills itself as the “leading designer and manufacturer of human entertainment robots in the UK”, explained the device via YouTube.

While many viewers expressed amazement at how realistic and human-like robots are, one comment said, “I know we’re supposed to be afraid of AI, but this is the first humanoid robot that doesn’t scare me… It’s so cool.”

Another comment mentioned that the device derives its realistic shape from the eyes, which make it appear as if it is alive, especially as they show rapid movement, focus, blinking and attention that they seem to pay to everything that catches their attention.

In the video, the robot appears to move its shoulder before opening its eyes and expressing a somewhat convincing look of shock or surprise, even blinking several times and curiously noticing its robotic arm.

The video ends with the robot Amika extending his hand admiring its combination of limbs, mechanical straps, actuators and arrays of sensors.

On the other hand, the robot is one of the pioneers in its realistic form and is at the forefront of its field in terms of facial expressions, but the next challenge remains to enable these robots to roam.

Engineered Arts said there is still a long way to go to achieve the goal of roaming the robot naturally, but added that the face is on a “human-like artificial body” and features a “robust Tritium robot operating system”.

It is noteworthy that the discovery of the robot Amica came in the wake of the development of the robot Sophia, which first appeared in 2016, which is a super-intelligent human-like head with a realistic face that can look from side to side and talk, which entered history in October 2017 when it became A legal Saudi citizen.

In addition, the company stressed that AMICA was specifically designed as a platform for developing future robotics technologies, which is the ideal robotics platform for human-robot interaction, explaining that the focus is on providing innovative, reliable, upgradable and easy-to-develop technologies.