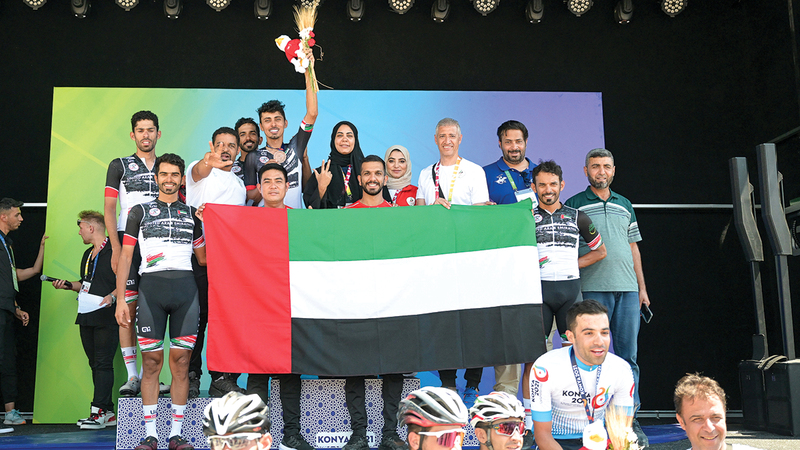 Yesterday, Yusuf Mirza, the star of the cycling team, added a new bronze medal for the UAE as part of the activities of the Fifth Islamic Solidarity Games, which will be hosted by the Turkish city of Konya until the 18th of this month. Mirza succeeded in winning his second medal in the men’s individual road race over a distance of 130 km, after achieving the gold points in the track competition, bringing the UAE’s medal tally to seven colored medals, two gold, silver and two bronze, in addition to the two bronzes for the bow and arrow team for People of Determination. The Iranian cyclist, Mohammad Ganjkhanlou, won the gold in first place, and the Algerian cyclist Youssef Raqiqi won the silver in second place.

On the other hand, weightlifter Ahmed Mostafa achieved good results in his participation in the 81 kg weight competition, achieving 225 kg in the overall total, after achieving 120 kg and 125 kg in the netter competition, while he achieved 95 kg and 100 kg in the snatch competition. Weightlifter Sheikh Khalid Muntasir Al Qasimi finished the 67-kg weight competition with a remarkable result after breaking his record in lifts, an increase of 8 kg over his previous record in the Asian Youth Championships in Uzbekistan, where he achieved two successful attempts in the netter competition of 115 and 120 kg.

Weightlifter Sheikh Khalid Muntasir Al Qasimi performed outstandingly in the competition, despite being the second youngest player in the list of 13 participants from all countries.

• The swimming team is participating today, and the weightlifting team has achieved good results.