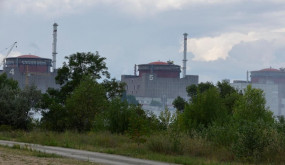 Digital Desk, Kyiv. The sixth power unit of the Zaporizhzhya Nuclear Power Plant (ZNPP) was disconnected from the power grid at 3:41 pm on Sunday. Ukraine’s national nuclear power producer Energoatum said preparations were on to cool it.

Energoatum said that for the past three days, the sixth power unit has been operating at critically low capacity, meeting only the plant’s own needs as all JNPP communication lines with the Ukrainian power grid have been damaged by Russian shelling. .

On 1 September the International Atomic Energy Agency mission arrived at the JNPP in occupied Enerhodar, Ukranska Pravda reported. On 5 September, four of the six IAEA mission participants completed their mission at the station, while two representatives of the organization were to remain there. On 6 September, the IAEA released a report on Innerhodder’s visit and confirmed that Russia has deployed military personnel and equipment to the ZNPP.

Ukraine’s Permanent Representative to the UN Sergei Kislitsya said the Russians tried to pressure IAEA Director-General Rafael Grossi while he was preparing a report on the ZNPP.