Zelensky calls on his army to “steadfast” .. and Putin is “proud” of his soldiers 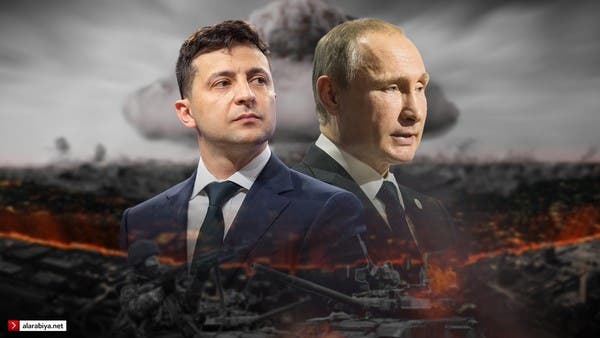 Today, Wednesday, the Russian army continues to strike the positions of Ukrainian forces and military infrastructure, and to liberate the Donbass lands, as part of its military operation launched on February 24, while Kyiv continues to receive material support and military equipment from Western powers.

British intelligence said that Russia is preparing to deploy large forces of reserve units in the Donbass.

Ukrainian and Russian forces are still clinging to their positions on the battlefields in eastern Ukraine to this day. Fighting in the months-long war has tilted Russia’s favour in the past few weeks, owing to its massive superiority in artillery firepower, a fact Ukrainian President Volodymyr Zelensky acknowledged in a late-night speech on Tuesday.

President Zelensky called on the Ukrainian army to be “steadfast”, saying that the outcome of the war depends on its resistance and ability to confront the Russian army and inflict losses on it. “The Ukrainian army is strengthening its defenses in the Lugansk region thanks to tactical maneuvers. This is really the most difficult spot. The occupiers are also pressing hard in the direction of Donetsk,” he added.

In return, Russian President Vladimir Putin declared that he was “proud” of the efforts of his soldiers in Ukraine, and promised more military reinforcements. In the Kremlin, Putin spoke to graduates of Russian military academies and senior military officials. Referring to the sanctions imposed on Russia, he said, “Certainly, they will be overcome.”

In the latest developments, Mikhail Mizintsev, head of the National Defense Monitoring Center in Russia, announced that Russian forces had evacuated more than two million people from dangerous areas of clashes in Ukraine and the Donbass republics.

For its part, the Russian Defense Ministry said that the M-777 155mm howitzer, which was delivered to Ukraine by the United States and European countries, has become a “good target” for its forces.

The ministry’s spokesman, Igor Konashenkov, said on Tuesday that during the past day alone 15 of these guns were destroyed, most of them at a railway station, without being able to fire a single shot.

Konashenkov also stated that high-precision missiles, launched from the air, destroyed four ammunition depots in the Luhansk Republic and the Buk-M1 anti-aircraft missile system in Donetsk People’s Republic, as well as inflicted losses on personnel and equipment of the Ukrainian Armed Forces and ultra-nationalist factions.

As Russian forces intensified their advance in Donbass in eastern Ukraine, a US official in Washington announced that US Attorney General Merrick Garland had made an unannounced visit to Kiev to hold discussions with Ukrainian Prosecutor Irina Venediktova about international and US efforts to help Kyiv “identify individuals implicated in war crimes.” and other atrocities in Ukraine, their arrest and prosecution.

For his part, the governor of the Lugansk region, Sergey Gaidai, spoke on Tuesday of “battles (circle) in the industrial district of Severodonetsk and catastrophic devastation in Lysechansk.”

For weeks, the area, which has been subjected to daily bombardments, has been witnessing violent artillery battles between Russian and Ukrainian forces.

Several cities in Donbass under the control of Kyiv are still preparing for the advance of Russian forces, such as Sloviansk and Kramatorsk, to the east of Severodonetsk.

On the military level, too, Russia reiterated that it had repelled an “adventure” from Kyiv’s forces to retake Snake Island, a symbolic and strategic area in the Black Sea that Moscow occupied at the beginning of its offensive on Ukraine, which began on February 24.