Zelensky: Diplomatic efforts are underway to save our fighters in Mariupol 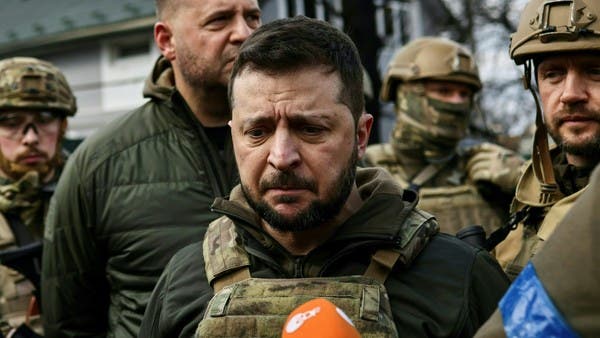 Ukrainian President Volodymyr Zelensky said on Friday that diplomatic efforts were underway to rescue the remaining fighters holed up in the Azovstal steel plant in the city of Mariupol, where more civilians were evacuated from the bombed factory.

The defenders vowed not to surrender. Ukrainian officials fear Russian forces may be seeking to eliminate them by Monday, the commemoration of the former Soviet Union’s victory over Nazi Germany in World War Two.

Ukraine said 50 civilians were evacuated on Friday, accusing Russia of violating a truce aimed at allowing dozens of others still trapped underground to leave after weeks of siege.


Mariupol is suffering the most devastating bombardment of the 10-week war, and the sprawling Soviet-era Azovstal factory is the last part of the city still in the hands of Ukrainian fighters.

In a video speech in the early hours of Saturday morning, Zelensky said that Ukraine was making diplomatic efforts to rescue the defenders holed up inside the steel plant. It was not clear how many Ukrainian fighters were still at the plant.

“Influential mediators are participating as well as influential countries,” he said, without giving any details.

UN-mediated evacuations began last weekend of some hundreds of civilians who had taken shelter in a network of tunnels and bunkers below the factory. But it stopped during the week due to renewed fighting.

Ukrainian Deputy Prime Minister Irina Vereshchuk said 50 women, children and the elderly were evacuated on Friday afternoon, adding that the operation would continue on Saturday. She said the Russian side is constantly violating the ceasefire in the area, making the evacuation process very slow.

Russia confirmed the number of evacuees and said, “The humanitarian operation in Azovstal will continue on May 7.”

Siege inside the factory..without food or drink

The city’s mayor said last week that 200 people were trapped in the factory with little food or water. It was not clear how many others were left.

Ukraine’s presidential adviser Oleksiy Aristovich said Russia is trying to eliminate the forces inside the plant to seize it by Monday as a gift to President Vladimir Putin for the World War II Victory Day holiday.

Putin had declared victory in Mariupol on April 21, ordering the closure of the factory and calling on the Ukrainian forces inside to lay down their arms. But Russia later resumed its attack on the plant.

Asked about Russia’s plans to celebrate the anniversaries of World War II in parts of Ukraine it controls, Kremlin spokesman Dmitry Peskov said, “The time will come to celebrate Victory Day in Mariupol.”

Battle for control of the East

Ukraine and its Western allies say that after failing to capture the capital, Kyiv, Russian forces have made slow progress in their revised goal of capturing the east and south of the country, but they may also plan to invade Ukraine’s western neighbor, Moldova.

Mariupol, which lies between Crimea, captured by Moscow in 2014 and parts of eastern Ukraine seized by Russian-backed separatists that year, is key to linking the two Russian-controlled regions and blocking Ukrainian exports.

Moscow describes its measures as a “special military operation” to disarm Ukraine and rid it of what it calls anti-Russian nationalism, fueled by the West.

Ukraine and the West say Russia launched a war without justification and have accused Russian forces of war crimes. Moscow denies the allegations and says it only targets military or strategic sites, not civilians.

More than five million Ukrainians have fled abroad since the invasion began.