Zelensky in front of the Albanian Parliament: Boycott Russia and keep it away 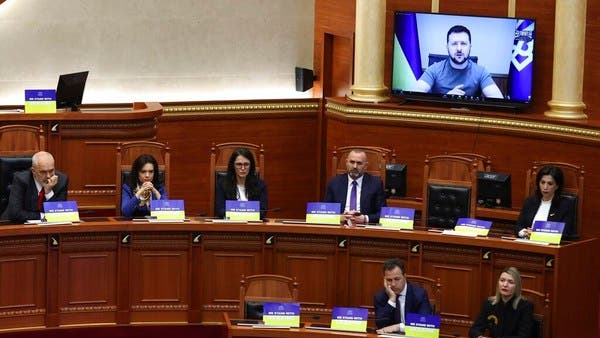 Ukrainian President Volodymyr Zelensky has reiterated his call for the world to remove Russia from all international financial and trading systems.

In a speech via the Zoom website, he called on the Albanian parliament, today, Tuesday, for Europe and the world to stop buying oil from Russia, to close Russian banks, and to stop trading with it.

He also called for closing ports to Russian ships and limiting the arrival of Russian tourists, according to the Associated Press.

It was “simply unfair,” Zelensky said of the United Nations’ purchase of nearly $2.5 billion in materials from Russia for its humanitarian operations.

He also thanked Albania for its full support, especially in the UN Security Council, where it is a temporary member.

The Ukrainian president had confirmed in an interview with Al-Arabiya, which was broadcast on Monday night, that the Ukrainian forces are not launching an attack on Russian territory, but rather the opposite.

He also stressed that the Russians closed all the ports in the country and besieged the sea channels.

Addressing the parliaments of the world

It is noteworthy that the Ukrainian president, since the start of the Russian military operation on February 24, has been accustomed to addressing the parliaments of the world to deliver his country’s message and to request the help of friendly countries.

It is noteworthy that since the start of the Russian operation, Albania, a member of NATO, has joined other European countries in imposing economic sanctions on Russia and preventing Russian aircraft from using its airspace, according to Reuters news agency quoted earlier.

Last March, the mayor of the Albanian capital, Tirana, announced that Albania would change the name of a street in the city that houses the embassies of Russia and Ukraine to “Free Ukraine Street” in a sign of support for the Ukrainian resistance.