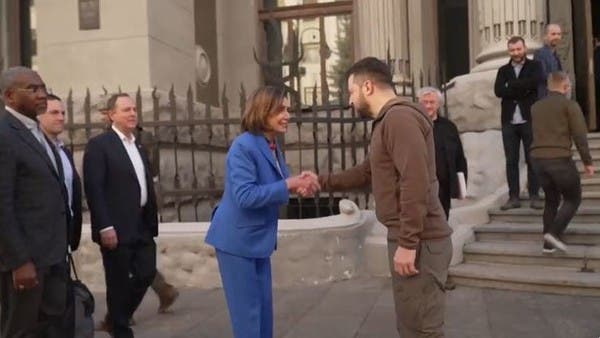 Ukrainian President Volodymyr Zelensky met on Sunday with Speaker of the US House of Representatives Nancy Pelosi, at the head of a congressional delegation, in the capital, Kyiv.

And the Ukrainian president wrote in a tweet: “Thank you to the United States for contributing to the protection of the sovereignty and territorial integrity of our country,” accompanied by a video in which he appears surrounded by armed guards when receiving Pelosi and the Congressional delegation in front of the presidential residence in Kyiv, and then during a meeting with American officials.

According to the video, which Zelensky shared on his Twitter account, Pelosi said: “Our conviction is that we are visiting you to say thank you for your fight for freedom. You are fighting a battle for everyone. We are committed to supporting you until the fighting is over.”

Among Pelosi’s entourage were Representatives Jason Crowe, Jim McGovern and Adam Schiff. It is reported that the visit was not announced in advance.

“Our delegation headed to Kyiv to send an unmistakable message to the whole world, to the effect that the United States stands by Ukraine,” a statement issued by the US delegation said.

US parliamentarians stressed that “additional US support is on the way” to Ukraine.

The visit came a week after a visit to Kiev by US Secretary of State Anthony Blinken and Defense Secretary Lloyd Austin.

Before that, Zelensky confirmed that he would rebuild the runway at Odessa Airport, which Russia had taken out of service, saying that Odessa would never forget what Russia had done to it.

And the governor of the Odessa region, Maxim Marchenko, announced that Russia had bombed a missile launched from the Crimea, the runway, which was officially opened last July, and explained that it was no longer possible to use the strategic port located on the Black Sea.

“We thank God that no one was injured. We are taking measures to address the vandalism in the region,” Marchenko added in a video posted on social media. The Ukrainian military said the airport could no longer be used.

As the Russian military operation on Ukrainian territory entered its third month, President Zelensky confirmed that Russia had deliberately destroyed the country’s infrastructure and closed the ports in order to put pressure on his country’s forces.

“The occupiers deliberately destroyed the infrastructure for the production, supply and storage of fuel” in the country, he said in a video speech at night.

He also added that “Russia has also closed the Ukrainian ports, so there are no immediate solutions to fill the current deficit.”