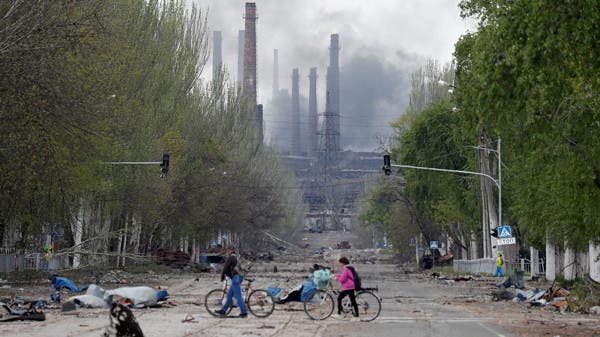 Ukrainian President Volodymyr Zelensky confirmed that Russian forces were still bombing the Azovstal steel plant in Mariupol, although the evacuation of civilians continued on Thursday.

Plumes of smoke were seen rising above the factory, captured by drone lenses.

Prior to that, Pentagon spokesman John Kirby denied that the United States had provided the authorities in Kyiv with intelligence about the whereabouts of Russian military leaders in Ukraine.

Kirby stressed that the United States provides battlefield intelligence to help Ukrainians protect their country, and added that Washington is not involved in making decisions about choosing targets for Ukrainian military strikes.

A new United Nations convoy headed to the Azovstal Industrial Complex, the last enclave of the Ukrainian resistance in the city of Mariupol, with the aim of evacuating civilians trapped there, a UN official announced on Thursday.

“Today, as we speak, a convoy is heading to Azovstal by tomorrow morning with the hope of evacuating and returning the remaining civilians who have been in this grim hell for several weeks and months,” UN Assistant Secretary-General for Humanitarian Affairs Martin Griffiths said during a conference in Warsaw. safely.”

This convoy constitutes a new attempt to evacuate civilians after the United Nations and the Red Cross said on Tuesday that 101 civilians were pulled out of tunnels at the Azovstal steel plant in the strategic southern port city of Mariupol. This was the first evacuation of civilians completed from this large industrial complex. They were transferred to the city of Zaporizhia, which is under the control of Kyiv.

For his part, Russian President Vladimir Putin confirmed Thursday that the Russian army is still “ready” to ensure the “safe” evacuation of civilians trapped with Ukrainian soldiers in the Azovstal complex.

The Kremlin quoted Putin as saying, during a phone call with Israeli Prime Minister Naftali Bennett, that “the Russian army is still ready to ensure the safe evacuation of civilians.”

Putin also said that Kyiv should order the Ukrainian fighters holed up in Azovstal to lay down their arms.

This comes as the commander of the Ukrainian forces in their last stronghold in the city of Mariupol appealed to the international community to pressure Russia to allow the evacuation of civilians and wounded soldiers.

Heavy fighting broke out today at the besieged Azovstal Steel Factory in Mariupol, as Russian forces attempted to complete control of Mariupol.

Hundreds of Ukrainian soldiers are holed up in the underground steel factory tunnels, many of them wounded, and some civilians with them as well.