Zelensky: Russia’s bombing of Kiev was aimed at humiliating the United Nations 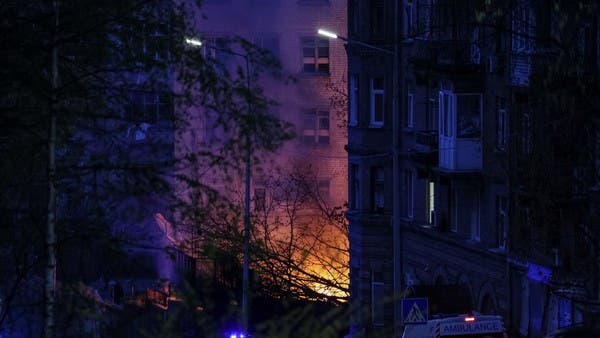 Ukrainian President Volodymyr Zelensky said Thursday that the Russian bombing that targeted Kyiv during the visit of United Nations Secretary-General Antonio Guterres to the Ukrainian capital was aimed at “humiliating the United Nations.”

Zelensky said in a video clip via Telegram that “this matter says a lot about Russia’s actual position towards international institutions, about the efforts of Russian leaders to humiliate the United Nations and everything the organization represents,” as he put it.

For his part, a spokesman for the United Nations announced that Guterres and his team were “shocked” by how close the Russian bombing that targeted the center of Kyiv from their whereabouts during their visit to the Ukrainian capital, stressing that they are all “fine”.

“It is a war zone, but it is shocking that it happened near us,” Saviano Abreu, a spokesman for the United Nations humanitarian office, told AFP, without specifying how close they were to the apartment building that was targeted by the bombing.

It is noteworthy that at least 3 people were wounded in a missile attack targeting Kyiv Thursday evening, while Guterres was visiting it, in the first strikes of its kind since mid-April, according to the mayor of the capital.

The fire engulfed a floor in one of the capital’s buildings, and windows were smashed, while large numbers of security and ambulance personnel spread in the place, according to AFP.

A fire in a building after the bombing in Kiev (Reuters)

The mayor of the Ukrainian capital, Vitali Klitschko, said that Russian forces “bombed Kyiv in the evening. Two strikes on the Shevchenkovsky district, on the lower floors of a residential building,” pointing out that “3 people have been taken to hospital so far.”

‘explosions over his head’

For his part, Ukrainian Foreign Minister Dmytro Kuleba noted on Twitter that the capital was targeted with long-range missiles, adding: “Russia once again shows its position on Ukraine, Europe and the world.”

In turn, Ukrainian Defense Minister Oleksiy Reznikov commented on the bombing via Twitter, saying it was an “attack on the security of the (UN) Secretary-General and global security.”

A fire in a building after the bombing in Kiev (Reuters)

One of the Ukrainian president’s advisers, Mikhailo Podolyak, wrote on Twitter: “Rocket bombing on central Kyiv during the official visit of Antonio Guterres.” “Yesterday, he was sitting behind a long table in the Kremlin, and today explosions over his head,” he added.

“Violation of the territorial integrity of Ukraine”

It is noteworthy that Guterres had met with Russian President Vladimir Putin on Tuesday in Moscow.

On Wednesday, he arrived in Ukraine, where he visited on Thursday, especially Bucha and Erbin near Kyiv, after they witnessed abuses attributed by the Ukrainians to the Russian army.

He also met with the Ukrainian president, considering that the Russian military operation in Ukraine is a “violation of its territorial integrity and the Charter of the United Nations.”

Support with weapons and gear

It is noteworthy that since last February 24, the Russian military operation on the territory of Ukraine has been condemned, while Western countries have lined up strongly with Kyiv, supporting it with weapons, equipment and humanitarian aid as well in order to confront the Russians.