Zelensky: Russia’s invasion of Ukraine is aggression against all of Europe 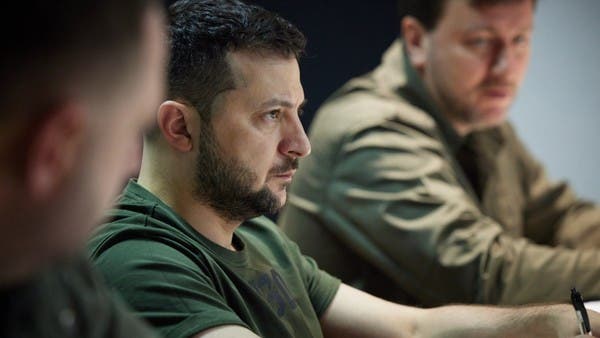 Ukrainian President Volodymyr Zelensky said today, Thursday, that the Russian invasion of his country amounts to an aggression against all of Europe, adding that the more his country obtains weapons from the West, the more it will be able to speed up the liberation of its occupied lands.

He said in a press conference that he discussed the possibility of imposing more sanctions on Russia and the reconstruction of Ukraine after the war during the talks he held with the leaders of France, Germany, Italy and Romania during their visit to his country’s capital.

He added that Ukraine was grateful for the arms supplies that helped it confront the Russian invasion that began on February 24, and that it expected to acquire modern missile and artillery defense systems.

“Every day delaying or postponing decisions is an opportunity for the Russian army to kill Ukrainians or destroy our cities. There is a direct relationship: the more powerful weapons we receive, the faster we will liberate our people and our land,” he said.

On Wednesday, after a phone call with his US counterpart, Joe Biden, Zelensky expressed his “gratitude” for the additional US military aid package to Kiev.

“The United States has announced a new reinforcement of our defense, a new support package worth one billion dollars… I am grateful for this support, it is especially important for our defense in Donbas,” the entire eastern region of the country that Russian forces are trying to control, Zelensky said in his daily evening speech.

And he added, “I fight every day for Ukraine to have the necessary weapons and equipment, but courage, wisdom and tactical skills cannot be imported. Our heroes have these.”

In another context, Zelensky said that he also had a phone conversation with British Prime Minister Boris Johnson.