Zelensky: We have not received enough weapons to break the siege of Maripol 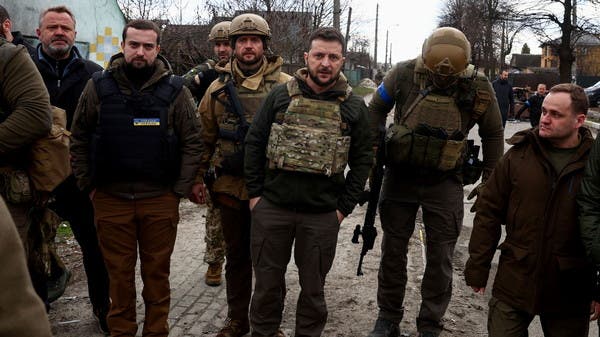 Ukrainian President Volodymyr Zelensky announced that despite his country’s pleas, Ukraine has not received the amount of weapons it needs to break the siege of Mariupol and liberate the city.

Zelensky noted that the defenders continue to resist at the Azovstal plant.

He stressed that Kyiv is using all possible diplomatic means to rescue them, but that Russia does not allow any of the proposed options.

He concluded by saying that Ukrainian cities and towns were exposed to 2,250 missiles during the two and a half months of the Russian military operation in Ukraine.

On the other hand, the Ukrainian president renewed his determination to achieve victory by uniting international efforts in support of Ukraine.

In addition, a US Defense Department official described the battles between the Russian and Ukrainian forces as turning into an artillery battle between the two sides, and that Moscow is adding new numbers of combat forces in Ukraine.

He explained that Russia now has 99 combat battalions in Ukraine, and maintains a huge force capable of using them.

The official stressed that the Russian forces are still slow in progress in the Donbass region, revealing that the “S-300” systems that Ukraine received from Slovakia are working well and preventing Russian forces from controlling the airspace.

A path that prolongs the war

The ongoing battles in southern and eastern Ukraine are taking an escalating path, the most dangerous of which will prolong the conflict and war.

In Odessa, overlooking the Black Sea, a barrage of missiles was hit, and the Ukrainian army documented the fall of seven of them and the injury of a civilian facility, resulting in deaths and injuries to civilians.

The Ukrainian armed forces accused Russia of targeting the port of Odessa to stop the export of agricultural products, a major producer of corn and wheat, while Kyiv and the allies are trying to open the ports or provide alternative ways to export grain, wheat and sorghum.

Russia also intensified its artillery and air strikes on the Azovstal factory in the devastated city of Mariupol.

In this regard, Deputy Prime Minister of Ukraine Irina Vereshchuk said that more than a thousand Ukrainian soldiers, including hundreds of wounded, are still inside the Azovstal plant in southern Mariupol.

For its part, the Ukrainian General Staff revealed indications of Russia’s readiness to launch offensive operations in areas in the Donbass in the east of the country and others around it.

On the other hand, Western countries are watching what they consider Russian violations in Ukraine and pledge to hold the perpetrators accountable. According to the head of the UN mission, there is documentation of unjustified killings in areas that were under the control of Russian forces.

300 civilians, including women and children, were killed in Bucha

Matilda Bogner, head of the United Nations Human Rights Monitoring Mission in Ukraine, confirmed that she had reports of the killing of 300 civilians, including women and children, in Bucha and other areas north of Kyiv that were controlled by Russian forces, and the number could increase as the search increases.

In a situation that reflects Germany’s increasing involvement in the war, Germany’s mission to NATO reported that the German army had deployed a Patriot system of the German-Dutch Joint Air and Missile Defense Force in Slovakia to secure the alliance’s eastern flank.